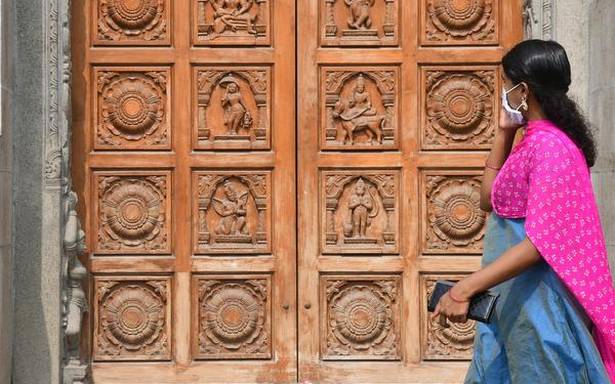 Devotees who visited on Monday morning were sent back; rituals will continue within the premises as usual

Following the fresh restrictions announced by the TN government to reduce the spread of COVID-19, over 800 temples under the Hindu Religious and Charitable Endowments (HR&CE) Department remained closed for devotees on Monday in Coimbatore district.

Officials from the HR&CE Department noted that the temples were closed for devotees after over seven months as they were earlier opened in September 2020 following last year’s lockdown. This includes prominent temples in the district such as Subramaniyaswami Temple at Marudhamalai, Patteeswarar Temple at Perur and Aranganathaswamy Temple at Karamadai along with Koniamman Temple and Lakshmi Narasimha Swamy Temple within the Coimbatore Corporation limits.

However, temple priests and HR&CE staff members were present at the temples on Monday. Daily rituals will be carried out inside the temple as usual, even in the absence of devotees. Some of the devotees who arrived at the temples were sent back citing the restrictions on Monday morning. ‘Annadhanams’ in the form of free food packets will be provided outside the temple premises at noon every day despite the closure of temples, the officials said.

To prevent overcrowding, no devotees will be allowed to participate in consecrations or other temple festivals, for which appropriate prior permissions were obtained by the temples from the district administration and HR&CE Department authorities, according to the officials.