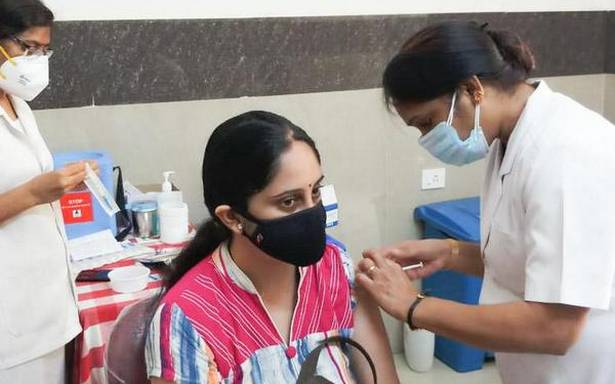 More number of women have been vaccinated against COVID-19 than men in Dakshina Kannada and Udupi districts.

Of the total number of people vaccinated in Dakshina Kannada, 74.68% have taken their first dose and 25.31% their second.

The government’s website, dashboard.cowin.gov.in, said that 88.19% of people have taken Covishield and 11.33% Covaxin.

According to Chief Executive Officer of Dakshina Kannada Zilla Panchayat Kumara, six villages in the district have achieved 100% success in administering first dose of the vaccine among the targeted people. The villages are Alike and Peruvai Manila in Bantwal taluk, Badagannur, Paduvanur and Siribagilu in Puttur taluk and Laila in Belthangady taluk.

“All those aged above 18 have been given the first dose in these villages,” Mr. Kumara said.

Nodal Officer for vaccination in Dakshina Kannada B.V. Rajesh said that about 2,000 staff, including nurses, doctors, helpers and accredited social health activists, are involved in the vaccination drive which was launched on January 16.

He said that the government has set a target of vaccinating 1.75 lakh college students, both general and professional, in the district. A majority of them have been given the first dose.

Dr. Rajesh said that 99% of those aged above 60 have been vaccinated in the district.