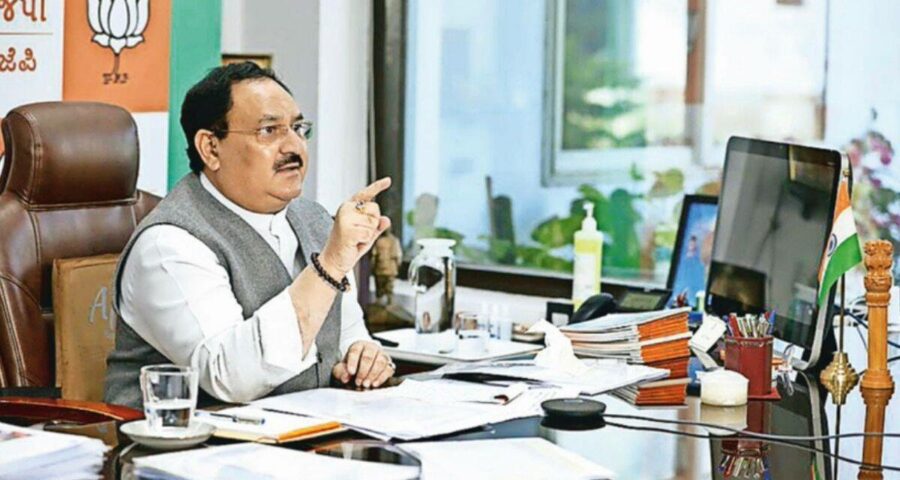 Speaking at a couple of events in New Delhi to mark the death anniversary of BJP ideologue Syama Prasad Mookerjee, Nadda also accused the Congress of "misleading" people about Covid-19 vaccines. BJP president J P Nadda claimed on Wednesday that opposition leaders are not visible among people and that their presence is all about Twitter and press conferences while his party has worked during the Covid pandemic to help people.

All parties except the BJP have gone into quarantine and isolation, and some are even in ICU, he alleged.

Speaking at a couple of events here to mark the death anniversary of BJP ideologue Syama Prasad Mookerjee, Nadda also accused the Congress of “misleading” people about Covid-19 vaccines while its leaders have “silently” got themselves vaccinated.

He claimed that his party played the role of “sadhak” (doer) during the pandemic while the opposition acted as a “badhak” (obstructionist).

Citing various comments by Congress leaders about the vaccines, he said, “They misled people. They have have got themselves vaccinated silently. Let any Congress leader stand up and say he has not been vaccinated.”

The BJP president flagged off Covid relief material on the occasion. The Delhi unit of the party, a statement said, has also decided to plant five lakh trees till July 6, Mookerjee’s birth anniversary.

Nadda reiterated that India will have 257 crore doses of Covid vaccines by the end of this year, enough to vaccinate the entire adult population.

The “decisive battle” that the Modi government has fought against Covid with people’s participation is unprecedented, he said.

Noting that Mookerjee died while fighting for Jammu and Kashmir’s complete integration to India, he said it was a matter of satisfaction that the Modi government fulfilled his goal, a reference to the nullification of Article 370 which had granted the erstwhile state special status.

Nadda lamented that Mookerjee died under “suspicious circumstances” but the then Congress government never ordered a probe despite pleadings by Mookerjee’s mothers and leaders of Jana Sangh, the forerunner to the BJP.

Mookerjee had died in detention in Jammu and Kashmir.