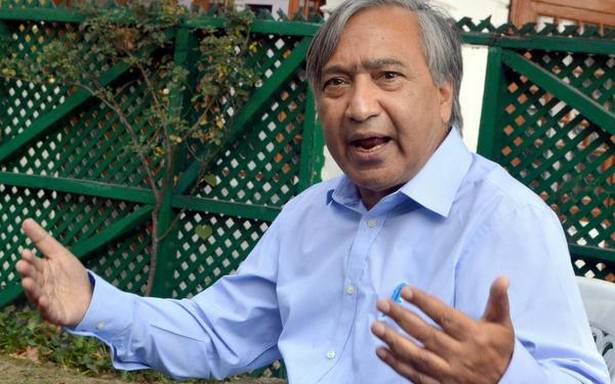 There has to be credible agenda, says bloc

CPI(M) leader and Gupkar alliance spokesman M.Y. Tarigami on Saturday said the onus of engagement and dialogue lay with the Centre and there had to be a credible agenda for it.

“Have we [J&K parties], together or separately, ever obstructed any dialogue since August 5, 2019 [when the Centre ended the special status]? In fact, on August 4, 2019, we appealed to the Prime Minister to provide us a chance to be heard but instead the leaders were placed in preventive custody. The onus of engagement and dialogue now lies with the government of India,” Mr. Tarigami said, in an interview to The Hindu.

Mr. Tarigami, who is also a spokesman for the amalgam of five political parties, said no one had approached the group so far. “J&K has seen a major assault without consulting its political class, civil society, traders, etc. We remain a deprived lot,” he added.

Dropping broad hints at being open to engage New Delhi 22 months after the abrogation of J&K’s special constitutional position, Mr. Tarigami said, “It’s the Centre that obstructed the processes of debate, discussion and dialogue and it [the Centre] should come up with a credible agenda for engagement.”

In a veiled demand, Mr. Tarigami said the Centre reduced J&K to a Union Territory and there was no harm to restore the status of statehood unilaterally. “Both the Prime Minister and the Home Minister had publicly promised to return statehood to J&K at an appropriate time,” he pointed out.

He said it was unfortunate to see Prime Minister Narendra Modi becoming adamant on Kashmir. “It does not suit the PM and his stature. He is the leader of the country and should hear and respond to people’s demands in the larger good of the country,” he added.

The Gupkar alliance this week held a meeting after over six months and discussed the participation of the National Conference in the delimitation process and engaging in a political process.

Of late, there have been attempts by the Centre to engage with J&K parties and work towards the return of statehood and an early Assembly poll.