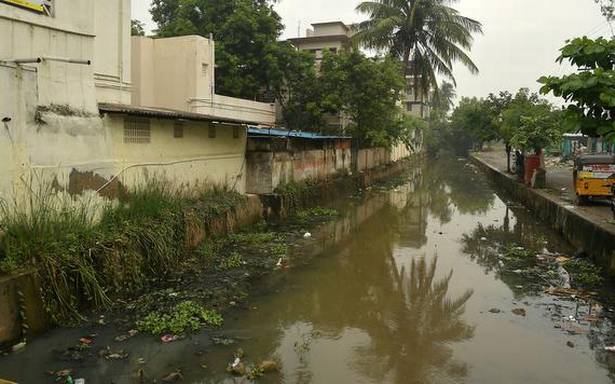 Corporation, PWD and district administration should work in tandem to remove all encroachments

The inundation of residential colonies in low-lying areas Tiruchi due to heavy discharge in the Koraiyar this week has turned the spotlight back on encroachments of drainage channels, the city’s primary storm water drainage network apart from Kudamuritti river.

Allaying apprehensions of the possibility of yet another flood, Collector S. Sivarasu, however, conceded that unapproved layouts and encroachments on drainage canals and wetlands (nanjai lands) have led to the inundation. Retrieving the canals after the rains will be the permanent solution, he told media persons.

Flooding of low-lying areas has been a recurrent phenomenon since the late 1990s due to rapid urbanisation around Karumandapam along Dindigul highway, Vayalur Road, Kuzhumani Road, Chinthamani area, Woraiyur and other places. Poor maintenance of the network of open drains that serve as storm water drains to discharge the rainwater into the Cauvery have made the problem acute. A network of canals, which had once served as irrigation channels, has been serving as the main storm water drains in recent decades. The Thennur Rettai Vaical, Kathirikai, Kathan, Kottai, Virupachipuram, Vannarapettai, Kathan, Thotti, Devadhanam, Tharanallur and several other canals have almost turned into massive open drainages and also carry rainwater into the Cauvery.

Many of these canals have been heavily encroached upon – some of the 15-25 feet wide ones have been reduced to just three to five feet. In places such as Chinthamani and Vayalur Road, padugai lands have been encroached upon and converted into residential colonies.

Only a contour canal

The Kudamuritti river, which originates near Puthur Aqueduct, carries the surplus or flood discharges from Koraiyar and Uyyakondan rivers to the Cauvery. It is a contour canal which does not have a bund on its left side. This arrangement was meant to allow the flood waters to head up whenever the Cauvery was in spate and drain when the flow subsides. Now, residential colonies and even educational institutions have come up close to the canal’s left flank.

A flood prevention project implemented over a decade back failed to address these issues, residents observe. “Nothing prevents the authorities from evicting encroachments, but they do not act,” rues a resident of Srinivasa Nagar.

“The city has a network of canals which serve as storm water drains. The Corporation and Public Works Department have, over the years, turned a blind eye to encroachments and shrinkage of the canals. This has resulted in several areas remaining under water for over four days now. It is a health hazard too. The civic body, the PWD and the district administration should get their act together to remove all encroachments from drainage canals ruthlessly to bring about a permanent solution to the recurrent problem,” said K.Suresh, former city secretary, Communist Party of India.

“The authorities can easily map places where inundation is common and come up with appropriate remedial measures. There is no proper planning or inclination. They have been talking about removal of encroachments for years,” observes S. Pushpavanam, secretary, Consumer Protection Council, Tamil Nadu.

“Pre-monsoon preventive measures, including proper maintenance of the underground drainage, should be carried out in right earnest,” says S. Sundararaju of Srinivasa Nagar South.