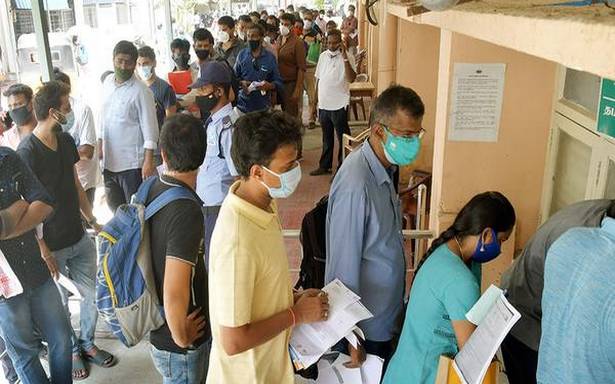 The existing one has been witnessing heavy rush

On Monday, the State Health Department launched a counter at KMC to sell the drug. The Tamil Nadu Medical Services Corporation set up a counter after people complained of the steep price of the injection in the open market. The drug is administered to people who are on oxygen support. Some people complained that the drug had to be procured from other States, and it was priced as high as ₹20,000. The government is selling the drug at ₹1,560 a pack.

The rush for the drug was heavy even on the first day. People are issued tokens and wait their turn to get the medicine. The rush only increased subsequently.

On Wednesday, a man said his brother had been waiting in the queue since morning. “The queue is not moving at all. There are around 500 people in the queue and it takes forever to dispense the medicine. Why can’t the government have five more counters? These people are potential carriers of the infection as they are buying the medicine for their sick relatives,” he said.

Dr. Vasanthamani said two counters would operate at the medical college from Thursday. The announcement did not bring much relief as some said even on Wednesday, many people were disappointed as there was no stock.