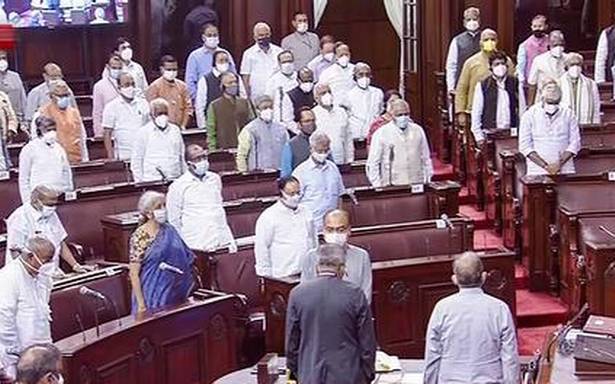 Protests by Opposition prevent PM from introducing his new Ministers

Vehement protests from the Opposition parties on repeated fuel prices hike, ongoing farmers’ agitation and alleged mishandling of the COVID-19 pandemic among other issues led to multiple adjournments in the Rajya Sabha on the first day of the monsoon session of Parliament.

The protests also prevented Prime Minister Narendra Modi from introducing his new Ministers. The Congress, TMC, AAP, YSR Congress and Left members were in the well of the House, protesting about different issues when Mr. Modi rose to speak.

Mr. Modi said it should make everyone proud that several women, several people belonging to the SC and ST communities, have taken oath as Ministers. Many new Ministers were children of farmers and belonged to OBC communities.

“It seems some people cannot digest that more women, SC, ST and OBC community members are becoming Ministers,” he stated.

The Opposition was up in arms after House Chairman Venkaiah Naidu disallowed 17 notices by different Opposition parties to suspend the scheduled business.

He said it was not feasible to take 17 issues in one go, and assured the members that all the important matters would be taken up in due course of time. Notices have come on different issues from the same party.

“This suggests that there is no single view on the urgency of issues and the need to be taken up by suspending the rules,” he observed. Only one of 17 notices pertained to the pandemic. This was moved by RJD’s Manoj K Jha, who wanted the House to discuss under-reporting of deaths caused by COVID-19. Mr. Naidu promised that all the issues would be taken up for discussion soon.

But the assurance did not pacify the Opposition members and they continued their protests, forcing Mr. Naidu to adjourn the House first till 2 p.m. and then till 3 p.m.

As soon as the House reassembled at 3:00 p.m., Opposition members entered the well of the House and started raising slogans against the government. Amid the din, Minister for Ports, Shipping and Waterways Sarbananda Sonowal introduced the The Marine Aids to Navigation Bill, 2021,. which seeks to replace an over nine-decade-old law governing lighthouses.

The House was adjourned within 20 minutes, for the third and final time with the Opposition continuing the protest.

Earlier in the day, the House was adjourned for an hour to pay respect to two sitting members- Rajeev Satav and Raghunath Mohapatra. Both died of COVID-19 related complications. The House also paid homage to its 10 former members, including actor Dilip Kumar and former Union Minister Ajit Singh as well as legendary track and field sprinter Milkha Singh.