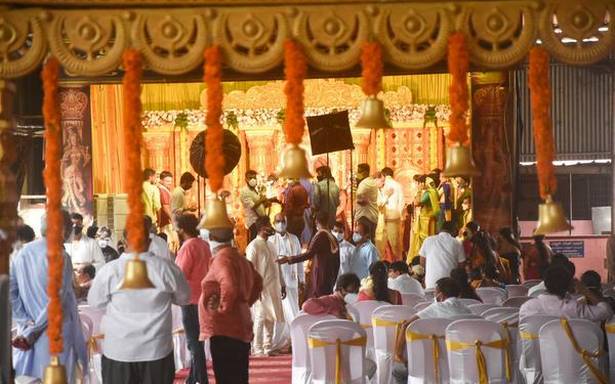 One marriage pertained to the daughter of Bhaskarchandra Shetty, a nominated councillor of Mangaluru City Corporation and a BJP activist

The Mangaluru South Police booked officials of the Mangaluru City Corporation (MCC), Mangaladevi temple administration and relatives of four couples whose marriages were organised at the temple in Mangaluru on Sunday in alleged violation of lockdown norms.

The action was taken following a complaint by Assistant Commissioner (Endowment Department) Sannalingaiah, who was among a team of officials who visited the temple.

The team went to the temple after a resident complained to Deputy Commissioner K.V. Rajendra about four marriages taking place in the premises. One of the marriages pertained to the daughter of Bhaskarchandra Shetty, a nominated councillor of Mangaluru City Corporation (MCC) and a Bharatiya Janata Party activist.

The team, which included MCC Deputy Commissioner B.K. Binoy, found people assembled for the marriages, which was far above the number permitted for marriages.

On a complaint by Mr. Sannalingaiah, the police registered a case for alleged violation of provisions of Karnataka Epidemic Diseases Act.

MCC officials, who permitted the four marriages, were booked. Police also booked the temple administration for allowing a large congregation of people in the premises. Heads of the families invovled in the four marriages have been named as accused, police said.