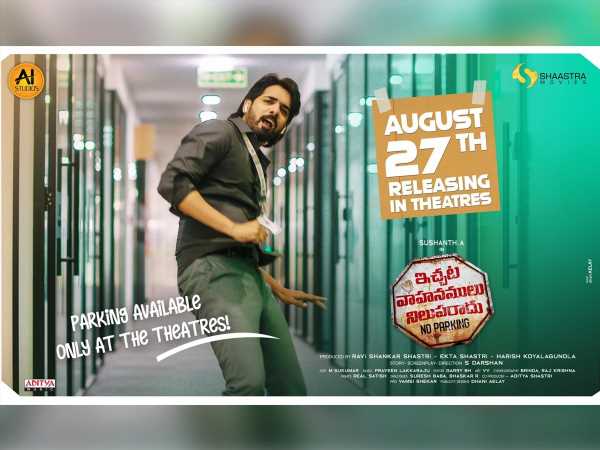 Sushanth is currently working for his upcoming film Ichata Vahanamulu Niluparadu . On the occasion of Sankranthi, the title of the project and the tagline – No Parking – was released. Sushanth A’s last films were Chi La Sow and Ala Vaikunthapurramuloo, both of which were received well.

Helmed  by debutant S Darshan and its story is inspired by real incidents. Sushanth starrer  is touted as an atypical thriller with a novel concept. Bollywood actress Meenakshi Chaudhary is playing the female lead and the upcoming film marks her debut in Tollywood. Priyadarshi, Vennela Kishore and others  will be seen in pivotal roles alongside Sushanth.  Vennela Kishore  is essaying the role of Sushanth’s close friend and an employee at the Royal Enfield store in this Telugu film.

Bankrolled by A1 Studios in association with Shaastra Movies, the film Ichata Vahanamulu Niluparadu marks the maiden production venture of the popular comedian Harish Koyalagundla. He will be co-producing it along with Ravi Shankar Shastri. Praveen Lakkaraju, who is  known for his work in Luck Unnodu, Express Raja is rendering the tune of this film.