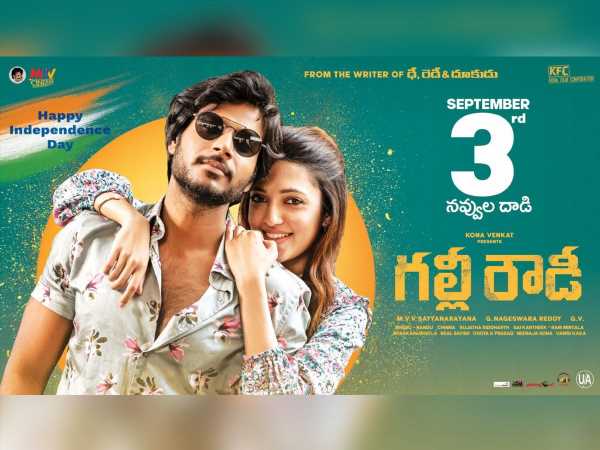 The young and talented actor Sundeep Kishan is getting ready for the release of his upcoming film, Gully Rowdy,  which is directed by G Nageshwar Reddy. In a tweet that he posted today Sundeep confirmed that his film Gully Rowdy will release in theatres on 3rd September. Gully Rowdy is a fun masala entertainer  that has Neha Shetty as the female lead. The film  romantic  and action drama is produced by Kona Venkat.

Gully Rowdy is produced by MVV Satyanarayana under MVV Cinemas banner whereas it is presented by Kona Venkat. Music is composed by Sai Kartheek. Apart from Sundeep Kishan and Neha Shetty, the film also has Rajendra Prasad, Bobby Simha, Vennela Kishore and Viva Harsha in supporting roles.

Sundeep Kishan starrer Gully Rowdy was initially slated for theatrical release on 21st May, but the release was postponed due to lockdown restrictions. Earlier in  the month of April the teaser of the movie was unveiled by Arjun Reddy and Geetha Govindam fame Vijay Deverakonda  that generated good buzz among the movie lovers.

In the month of July, there was a strong buzz that  Gully Rowdy would be released on OTT platform. Putting an end to rumours, the actor had said that they would wait for theatres to reopen.