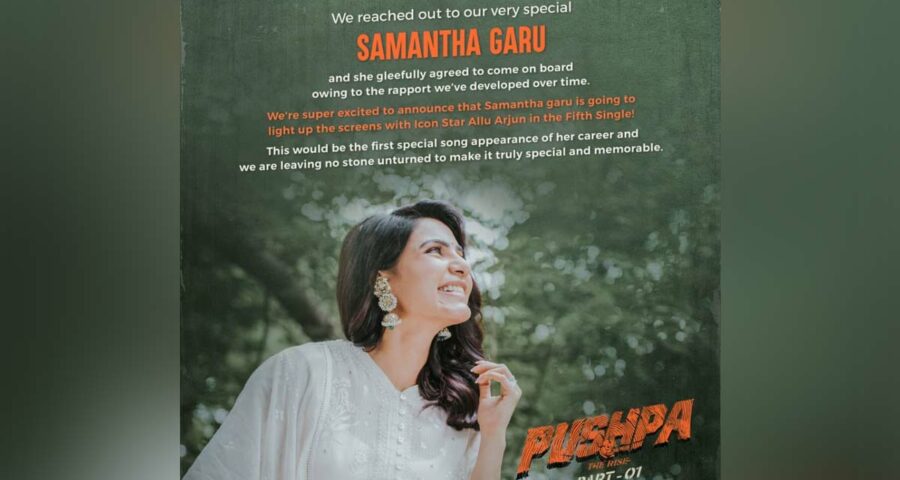 Yesterday evening we reported that Sukumar is planning to bring Samantha Ruth Prabhu on the board to shake a leg for the special song in much awaited action and romantic drama Pushpa: The Rise, which is progressing at the brisk pace and has icon Star Allu Arjun and Pooja Hegde in the lead role. Finally today the team of Pushpa: The Rise officially confirmed that Samantha is going to groove for a sizzling number in Allu Arjun starrer.

The upcoming film Pushpa: The Rise is based on real-life incidents about red sandalwood smugglers in the Seshachalam hills of Andhra Pradesh’s Rayalseema region.

Directed by Sukumar, the movie will see  Allu Arjun essay the role of a sandalwood smuggler. Pushpa: The Rise will also see Faasil in the role of the film’s antagonist and Rashmika Mandanna as the leading lady.

Meanwhile Rashmika Mandanna is making her Bollywood debut with Majnu. The Geetha Govindam actor recently wrapped up the shooting of the movie, which also stars Sidharth Malhotra. On the otherside, Samantha will be seen playing the titular role in Gunasekhar’ magnum opus Shaakuntalam, which will be release very soon.  Rangasthalam and Oh Baby fame actress was last seen in web drama The Family Man 2.

Rajamouli decides to bring Samantha and Mahesh Babu together?

Samantha about her first child: My poor firstborn