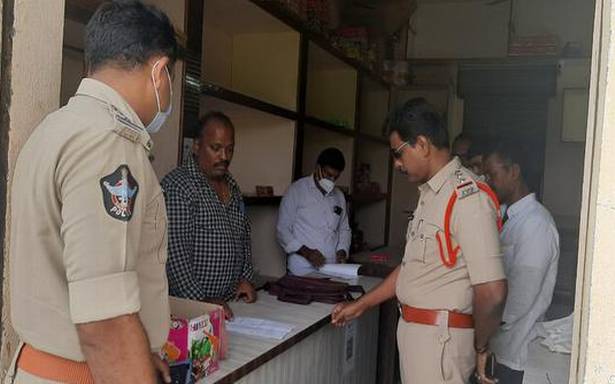 Raids conducted on sale and stock points in Krishna

Listing out a slew of instructions, officials of the Police and Revenue Department have appealed to the public as also wholesale and retail fire cracker sellers to follow all the safety measures to have a safe and sound Deepavali.

The Revenue, Fire and Police department officials inspected the sale points and stock points as a precautionary measure on Tuesday.

Directing DSPs and Station House Officers(SHOs) to conduct raids to prevent illegal sale of firecrackers, Krishan district Superintendent of Police (SP) Siddharth Kaushal said: “In Krishna district, licenses have been issued to 423 shops in 59 locations. We request the public to alert the police if they notice any illegal manufacturing units in colonies, houses or in villages. Public are requested not to prepare crackers on their own, and buy crackers of licensed companies only.”

Vijayawada Police Commissioner B. Srinivasulu directed the police personnel to act tough against those who were selling firecrackers illegally.

In West Godavari district, permanent and temporary licenses have been given to about 190 traders, said SP Rahul Dev Sharma. The wholesale traders were instructed to maintain firefighting equipment, such as extinguishers, sand and water at the godowns and keep the stocks away from electric boards, said Mr. Rahul Dev Sharma.