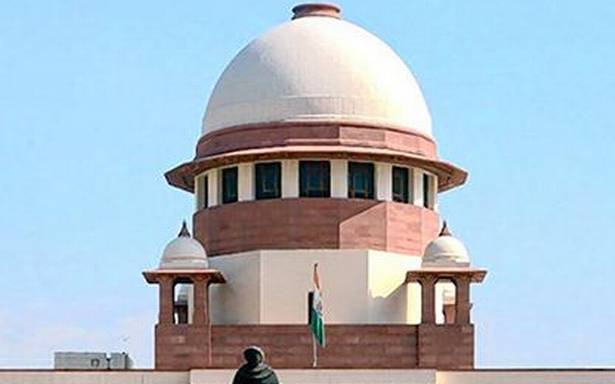 In its December 17, 2021 order, the Supreme Court directed the Maharashtra and Madhya Pradesh election commissions to re-notify the seats reserved for the OBCs under the general category

The Supreme Court on Monday said it would hear on January 17 the matters in which it had directed the state election commissions of Maharashtra and Madhya Pradesh to re-notify the seats reserved for the Other Backward Classes (OBCs) in the local bodies in these States under the general category.

The Court said the application filed by the Centre, which has sought a recall of its December 17 last year order directing the Madhya Pradesh State Election Commission to stay the poll process on the seats reserved for the OBCs in the local bodies there and re-notify those under the general category, would be heard on January 17.

"This will come up on January 17," a bench of justices A.M. Khanwilkar and C.T. Ravikumar said.

One of the advocates appearing for the petitioner in the matter concerning Madhya Pradesh told the bench that his matter has become infructuous as the ordinance against which he had moved the court has been withdrawn.

"All these matters will be heard together," the bench said.

Appearing for the Centre, Solicitor General Tushar Mehta told the Court that the Union Government has issued directions regarding the compliance of the verdicts delivered by a constitution bench as well as a three-judge bench of the top court earlier.

"We have done that," Mr. Mehta told the bench, adding, "We have also moved an application seeking some relief in the matter." The bench said the application would be listed on January 17.

In its December 17 order, the apex court had referred to the constitution bench verdict of 2010 that had mentioned three conditions, including the setting up of a dedicated commission to conduct a contemporaneous rigorous empirical inquiry into the nature and implications of the backwardness qua the local bodies in the states, which are required to be followed before provisioning such reservation for the OBC category.

It had also said that subsequently, a three-judge bench of the court had reiterated the same.

The apex court had observed on December 17 that it had passed an order on December 15, directing the State Election Commission of Maharashtra to notify the seats in the local bodies that were reserved for the OBCs as general category seats.

In its application seeking a recall of the December 17 order, the Centre has said the uplift of the Scheduled Castes (SCs), Scheduled Tribes (STs) and OBCs has been its utmost priority and an inadequate representation of OBCs in the local bodies defeats the "very object, intent and purpose of the idea" of de-centralisation of power and taking governance to the grassroots level.

It also urged the Court to direct the local body elections to be deferred for four months with a mandate to the state government to come out with the report of the commission and directing the SEC to hold the elections accordingly.

The Centre has requested the top court to suspend the election process as an interim measure.

It has also sought impleadment in the matter in which the court had passed the order on December 17.

It said while the mandate of law in the judgments delivered by the constitution bench and the three-judge bench has to be complied with, the apex court may consider striking a balance between the adherence to these verdicts and protecting the interest of those belonging to the OBC category, which is the Government’s utmost priority.

The Centre said in accordance with the assurance given before the top court, it has already issued a detailed advisory to all the States, requiring their strict compliance with the binding judicial pronouncements in the two verdicts.

The court had passed the December 17 order after the matter related to local body elections in Madhya Pradesh on the seats reserved for OBCs was brought before it.

It had said the matter related to Madhya Pradesh would be listed along with the petitions pertaining to Maharashtra on January 17.

In March last year, a three-judge bench of the apex court had said the reservation in favour of the OBCs in the local bodies concerned in Maharashtra cannot exceed 50% of the total seats reserved for the SCs, STs and OBCs taken together.

It had referred to the three conditions noted in the constitution bench verdict of 2010.

The conditions included specifying the proportion of reservation required to be provisioned local body-wise in light of the recommendations of the commission so as not to fall foul of overbreadth and in any case, such reservation shall not exceed an aggregate of 50% of the total seats reserved in favour of the SCs, STs and OBCs taken together.