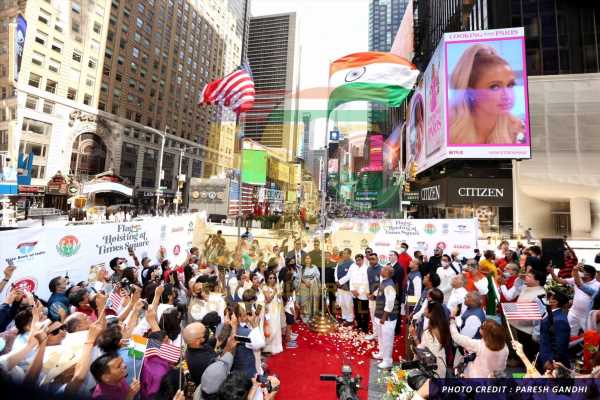 A fly-past by a 220-ft-long majestic Indian tricolour, made of khadi, over the iconic Hudson river and the display of a giant billboard at Times Square are among the highlights of the grand celebrations planned to mark 75 years of India’s Independence in New York this week. The Federation of Indian Associations NY-NJ-CT-NE (FIA) has planned a plethora of special events to celebrate India’s 75 years of Independence — Azadi Ka Amrit Mahotsav this year.

The commemoration will start with the hoisting of the Indian national flag, made of khadi, at Times Square on August 15. As in previous years, the iconic Empire State Building will also be lit up in hues of the Indian tricolour.

FIA said that as part of its grand celebrations to mark 75 years of India’s independence under the auspices of Azadi Ka Amrit Mahotsav, the diaspora organisation will display a giant ’India Day Parade’ billboard at Times Square on August 15.

Further, a special 220 feet-long Indian tricolour, made of khadi, will be flown over the Hudson River, FIA said, adding that this will be a one-of-its-kind special fly-past of the ’largest Indian tricolour’ over the iconic river and will be witnessed by thousands.

FIA President Kenny Desai announced that the Grand Marshal at FIA’s 40th India Day Parade on August 21 will be Allu Arjun, the Telugu superstar whose movies have been a hit across India.

At this year’s parade, FIA said attempts will be made to set the Guinness World Records for the ‘most different flags flown simultaneously’ and the ‘largest ensemble damaru.’

Arjun, as the grand marshal, will lead the parade along with the New York City mayor and a host of other distinguished dignitaries and celebrities. The FIA India Day parade is considered the largest parade outside India to mark the country’s independence and brings together thousands of members of the diaspora for one of the biggest cultural extravaganzas in the US.

FIA said its entire team and the Indian-American community are all set to create history with its grand celebrations of India’s 75th Independence Day this year.

FIA’s team of 180 volunteers are working round the clock to prepare for the various events to be held on August 15 and 21st to celebrate the motherland and the ‘Azadi Ka Amrit Mahotsav’ marking the 75th Anniversary of India’s Independence.

FIA added that it has reached out to over 100 Tamil and Telugu Associations and received tremendous response in support of the events.

FIA chairman Ankur Vaidya called on the diaspora community to support the tireless and selfless efforts of the volunteers working round the clock to ensure the success of all the events. The two attempts to set the Guinness Book of World Records have ”global inclusiveness and a message of peace, harmony and spirituality”.

The India Day Parade, a cultural extravaganza, which had also faced disruptions due to the Covid-19 pandemic, runs through several streets of Madison Avenue in the heart of Manhattan, featuring tableaux by various Indian-American organisations, marching bands, police contingents and cultural performances by young Indian-American children.

Desai voiced appreciation for the FIA committee for its work and efforts and said he is proud to be part of the team which has been working tirelessly round the clock to put together this event of massive proportion.

Every year, thousands of people from the Indian diaspora converge in the heart of Manhattan in their traditional finery to celebrate India’s Independence Day. The day-long celebration includes special food stalls, a cultural extravaganza and floats by various organisations based in the US.