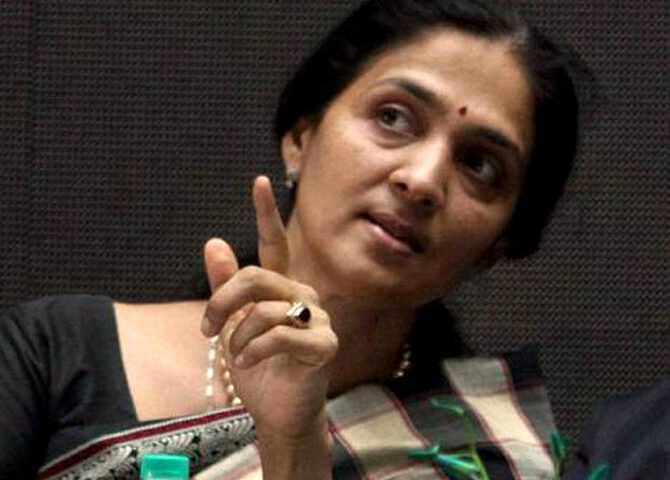 It is the biggest issue we have ever faced in the securities market, where a sensitive and systemically important institution and first-line regulator was not only exploited by unscrupulous elements but functioned like a private fief, points out Debashis Basu.

The Central Bureau of Investigation recently filed a chargesheet against Chitra Ramkrishna, former chief executive officer of the National Stock Exchange, and Anand Subramanian, former group operating officer (GOO), in connection with the co-location (colo) fraud case at the exchange.

The chargesheet named the two for allegedly providing preferential and unfair access to the NSE’s trading system to some brokers. It also alleged that key information — such as the NSE’s organisational structure, dividend scenario, financial results, human resources policy, response to the regulator, and future projects — was sent to an external e-mail ID, [email protected], between 2013 and 2016.

In 2013, Ramkrishna became CEO of the NSE and immediately inducted Subramanian as her number two. It may be recalled that an order of the Securities and Exchange Board of India (Sebi) in February 2022 documented how, in her view, the world’s largest derivatives exchange was being run with the blessings of a Himalayan yogi, who was communicating with her through the e-mail id referred to!

To those familiar with the case, it may seem the CBI is trying to duplicate the work already done by Sebi when it investigated the colo fraud, had issued show-cause notices, and then final orders over four years, in drips and starts. But Sebi let off the main actors in the scam with minor raps.

The show-cause notices primarily blamed Ravi Narain, who was managing director and CEO till March 2013, Ramkrishna, who held the post from April 2013 to December 2016, and Subramanian.

Sebi said it was their laxity and dereliction of duty that led to the brokerage firm, OPG Securities, getting preferential access to select servers day after day.

It also issued a supplementary SCN on the NSE’s ‘inconsistent responses’ as well as poor procedures, policies, and documentation. And yet, Sebi was unable to fix the accountability of specific persons or quantify all the illegal gains by brokers who obtained preferential access.

Though it is armed with enormous policing powers, Sebi relied almost entirely on the forensic audits it had asked the NSE to conduct. Naturally, the SCNs have no hard evidence about who was responsible for things going wrong at the NSE’s colo.

Sebi interrogated NSE officials, brokers, and others, and then recorded a series of bland and evasive answers by the NSE’s brass, including Narain and Ramkrishna, who had tight control of the exchange. Their answers to Sebi questions typically were: ‘Can’t remember’ or that ‘Department heads would know it’ or that ‘They would have ensured compliance’.

Ramkrishna projected herself as an expert in technology but, at the interrogation, deflected all responsibility to the technology heads. Questions about fraudulent preferential access were brushed off as ‘operational’ or ‘technical’ issues about which she did not know.

This buck-passing appears outrageous, given that Ramkrishna made Rs 44 crore (Rs 440 million) in a little over three years as MD and CEO of the NSE. She earned around Rs 18 crore (Rs 180 million) in her last eight months in office before resigning in December 2016. Her salary more than doubled in 2016 from her previous year’s package of around Rs 9 crore (Rs 90 million), even as the scam investigation was going on.

When Ramkrishna quit the NSE, her remuneration was around Rs 23 crore (Rs 230 million), including variable pay and perks. However, according to her, she was not accountable at all for the rot at the NSE.

Narain took the same stance. In other words, the NSE brass had an enormous upside and no downside. If you are big and influential, the price of getting caught in the securities market is insignificant and can be easily challenged in court.

Will the CBI be able to do what Sebi avoided doing?

While Sebi has draconian powers of search, arrest, and freezing assets, it did not use these powers. It also did not frame charges of fraud.

Sebi repeatedly asked senior NSE officials to comment on whether their colo policies took into account the principles of fair and equal access. Since it did not focus on pinning responsibility, the answers that it got were sheer obfuscation. These vague responses then formed the basis of Sebi’s weak orders, which have been promptly challenged by aggressive lawyers for the NSE and its former brass.

If the CBI wants to get at the truth, it has to cast its net wide, without fear or favour. It has to have long chats with current and former NSE and Sebi heads and NSE board members of the past few years, all of whom contributed to the colo scam and or/the investigation getting smothered by a web of legal and technical issues.

According to a legal expert, by her admission, Ramkrishna was acting on instructions of unknown persons outside the exchange. This amounts to fraud under Sebi’s provisions, but the regulator’s order does not charge her with fraud and therefore gives her a big leeway.

The fact is unfair trade practices and rampant misgovernance at the NSE amount to taking the entire nation — as also all listed companies, investors, and intermediaries — for a ride.

It is the biggest issue we have ever faced in the securities market, where a sensitive and systemically important institution and first-line regulator was not only exploited by unscrupulous elements but functioned like a private fief.

The only way it can be set right is by pinning responsibility on all the main actors of this scam and all the ‘yes-men’ who supported them.

Will the CBI do what Sebi did not?

Debashis Basu is the editor of www.moneylife.in