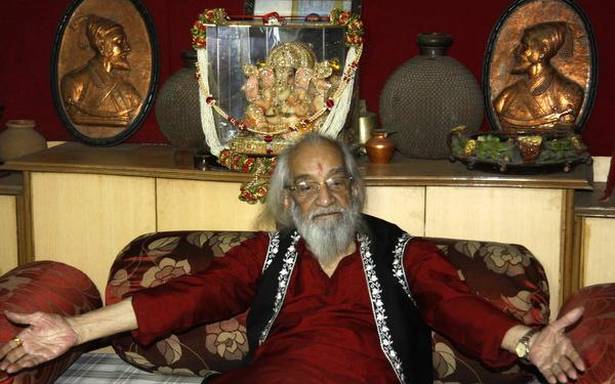 Noted historian and Padma Vibhushan awardee Balwant Moreshwar Purandare, popularly known as ‘Babasaheb’ Purandare, is said to be in a critical condition and is undergoing treatment at a private hospital in Pune, said sources on Sunday.

Mr. Purandare, an authority on the 17th century Maratha warrior king Chhatrapati Shivaji, was diagnosed with pneumonia a week back and was admitted to the Deenanath Mangeshkar Hospital.

“He has been diagnosed with pneumonia owing to advanced age and is on ventilator in the ICU. His health has deteriorated and he is in an extremely critical condition,” said Shirish Yadkikar, hospital’s public relations officer.

The historian’s declining health sparked rumours in a section of the vernacular media and a number of local news portals.

The 99-year-old historian is known by his moniker ‘Shiv Sahir’ (literally Shivaji’s bard).

Raja Shivchhatrapati, Mr. Purandare’s wildly popular two-part, 900-page magnum opus on Shivaji in Marathi, was first published in the late 1950s and has since been a staple in Marathi households, going through numerous reprints over decades.

Earlier this year, tributes had flown in from the political spectrum on the occasion of his completing 99 years with Prime Minister Narendra Modi greeting him via a video message.

“Babasaheb’s work is inspirational. I visited Pune to see Babasaheb’s play Janata Raja, based on Chhatrapati Shivaji Maharaj. Even when Babasaheb used to visit Ahmedabad, I used to attend his programmes,” Mr. Modi had said.

RSS chief Mohan Bhagwat and former Chief Minister Devendra Fadnavis were among those who paid tributes to the historian while Maharashtra Navnirman Sena (MNS) chief Raj Thackeray had driven to Mr. Purandare’s residence to felicitate him in person.

The historian was one of the earliest ideologues of Bal Thackeray’s Shiv Sena in the 1970s. He also conceived and directed the theatrical history extravaganza Janata Raja in the mid-1980s — a mammoth production performed by more than 200 artistes across the country and even abroad and is said to have given more than 10,000 lectures on Chhatrapati Shivaji.

Mr. Purandare has had his fair share of controversy for his portrayal of Shivaji, with outfits like the pro-Maratha Sambhaji Brigade as well as certain Congress and NCP leaders claiming that he deliberately falsified the history with a malafide intent.

The Sambhaji Brigade, which had vehemently opposed the then Devendra Fadnavis-led BJP Government’s decision to honour Mr. Purandare with the prestigious ‘Maharashtra Bhushan’ award, has claimed that Mr. Purandare’s works on Shivaji were allegedly given a ‘casteist’ and ‘communal’ spin.