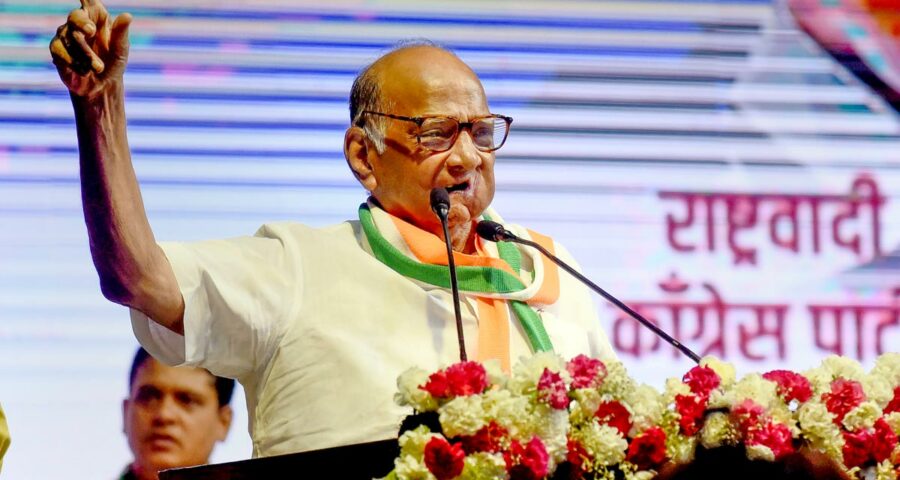 ‘They know Sharad Pawar will be playing a huge role in unifying the Opposition.’

The Sharad Pawar-led Nationalist Congress Party’s leadership has come together lock, stock and barrel to defend Ajit Pawar after media reports suggested a rift between him and another senior NCP leader, Jayant Patil, when the latter was invited to speak before him at Sunday’s party national council meeting in New Delhi.

NCP Founder Sharad Pawar was re-elected party president for another four years at Sunday’s meeting, making him the longest serving president of a political party in India.

“This is politically motivated. Even if Delhi reporters are honest, objective, balanced and neutral, everybody knows how important the ownership of these (news television) channels in helping the (Narendra Damodardas) Modi government,” says Tapase.

According to Tapase, the BJP is scared that Sharad Pawar could play a big role in unifying the Opposition against the BJP just before the 2024 general election.

“The BJP is already sensing trouble given how successfully (Sharad) Pawar saheb organised a meeting in its bastion; the (Talkatora) stadium was filled to capacity; as many as 50 per cent of all the people who were inside the stadium were standing outside the stadium,” says Tapase.

“The NCP workers were disciplined and so the BJP had to invent this rift to play down the grand success of our national convention meeting,” adds Tapase.

Clyde Crasto, another NCP spokesperson, also blames the media and the BJP for creating a narrative to play down Sharad Pawar’s importance in national politics.

“Just because the NCP’s national executive convention was a huge success, the BJP and its media stooges in Delhi could not digest it and so they invented this rift to shift media attention away from the success of our convention,” says Crasto.

“One BJP stooge media representative in Delhi decides to talk nonsense about Ajit Pawar. If a person is sitting from 10 am till afternoon, then doesn’t he want to go to the toilet? Which human being on earth won’t want to go to the loo after 4-5 hours?” asks a former NCP minister who was present at Delhi’s Talkatora stadium and witness to Ajit Pawar’s popularity with party workers at the venue.

“Now there are 6,000 people at the Talkatora stadium, one thousand around the stage and while on his way to the loo and back he is taking selfies, photographs, then he is going to take time to come back on stage, no?” the former minister adds.

“And he came back on stage afterwards. They (the BJP stooges) are not talking about it. They are also not talking about Ajit Pawar having lunch with NCP karyakartas (workers). He also gave bytes to the media (on September 11 after the national convention was over),” says another NCP leader who was also present at the two-day national council meeting. According to media reports, Ajit Pawar, who is considered second-in-line in the NCP leadership hierarchy after Sharad Pawar, was miffed that Jayant Patil was given a chance to speak before he did at the NCP national convention and so he left the gathering in a huff to express his displeasure.

“There is absolutely no substance to this (speculation about the rift between Jayant Patil and Ajit Pawar),” adds the leader.

“Ajit dada never speaks at meetings of the NCP’s national executive. He has never done that before. He didn’t speak at the Bihar or Gujarat conventions in the recent past or at the two conventions that were held in Delhi some time ago,” says Sanjay Miskin, a political observer from the state, who is considered close to the NCP.

But didn’t NCP General Secretary Praful Patel invite Ajit Pawar to come on stage and address the gathering? This only after Jayant Patil spoke, something that reportedly miffed Ajit Pawar?

“The karyakartas were asking (that Ajit Pawar be asked to speak) so Praful bhai just asked him to speak a few words without realising that he had gone to the loo. He also requested Jayant Patilji to come on stage and speak for two minutes which he did,” says the afore-quoted former minister.

Defending this chronology, Tapase says, “Even when Ajit dada was the deputy chief minister (of Maharashtra) he would always speak after Jayant Patil saheb. Whoever speaks in the end is considered bigger in stature in any political party. Can Ajit dada speak after Sharad Pawar has spoken? Can any other Maharashtra NCP leader speak after Ajit dada? No.”

“It is becoming evident with each passing day that one man (Narendra Damodardas Modi) who thinks he is invincible is hiding behind his (media) stooges to prove that he is invincible. If you are so invincible, then why are you scared of (Sharad) Pawar saheb and the entire Opposition?” asks the NCP leader.

“That you are targeting just one man (Sharad Pawar) by spreading rumours about a rift (between party leaders Ajit Pawar and Jayant Patil) proves how insecure and scared you are,” he adds.

“Your earlier attempt to play (Ajit) Pawar saheb against his uncle (Sharad Pawar) in 2019 failed miserably (when the Devendra Fadnavis-Ajit Pawar government fell within 80 hours of taking oath of office on the early morning of November 23) and now again you will be embarrassed by your own deeds; BJP propaganda won’t succeed,” asserts this NCP leader.

“It is a classic BJP act of subterfuge to create confusion and scotch narratives that work against them. They know that Sharad Pawar, despite his age (the NCP supremo will turn 82 this December 12), will be playing a huge role in unifying the Opposition against the BJP’s and RSS’s hate factories,” says he.

“Ajit dada is a very nice man. He is a man with a big heart. Everybody in Maharashtra knows that. We all came back happily as one family from Delhi yesterday,” says Crasto.

Ask Crasto if Sharad Pawar, who will be 82 on December 12, should retire from politics, and pat comes the reply.

“Why should Sharad Pawar retire? Name one person in Indian politics who is as active as Sharad Pawar at his age. Tell me how many people at his age from any political party are as accessible to people and workers as him? Is there any leader who is politically so sharp at this age?”

“It’s not about Ajit Pawar; the BJP’s target is Pawar saheb,” says Miskin explaining the Ajit Pawar-Jayant Patil rivalry reports in a nutshell.