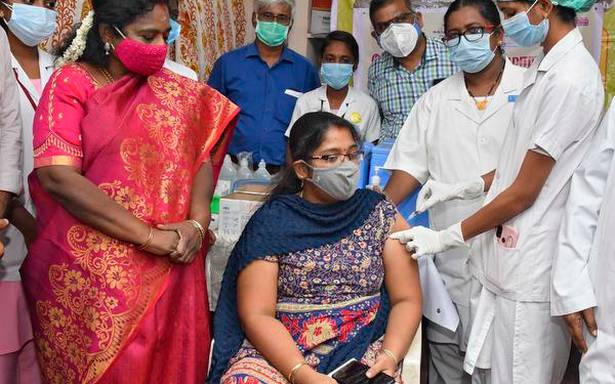 ‘The second wave of the pandemic wass fairly under control in the UT, there had been a slight increase in number of cases in proportion with the higher test numbers’

Lt. Governor Tamilisai Soundararajan on Friday sought the cooperation of the public in achieving 100% vaccination against COVID-19 in the Union Territory.

Inaugurating a 48-hour, non-stop vaccination camp at the Villianur Primary Health Centre, Ms. Soundararajan said though the second wave of the pandemic was fairly under control in the UT, there had been a slight increase in number of cases in proportion with the higher test numbers.

Stressing the importance of sustaining vigil and adopting inoculation as a measure of protection from the coronavirus, the Lt. Governor pointed to the various programmes of the health department to make it simpler for people to take their jab. As a result of measure such as night-time vaccination and street corner session sites, at least 48 villages in the UT had become fully vaccinated.

She appealed to the public to avail of the facilities being provided by the government to get vaccinated against COVID-19 amid reports of a third wave.

The marathon vaccination camp which began at 8 a.m. will conclude at 8 p.m. on Sunday.

Such a camp, which is a first in the country, was organised to offer round-the-clock convenience for the public to get vaccinated, the Lt. Governor said.

In Villanur, of an estimated 59,000 beneficiaries, about 53,000 persons had already taken the jab. She called for public support in achieving 100% vaccination in the PHC jurisdiction and across the UT.