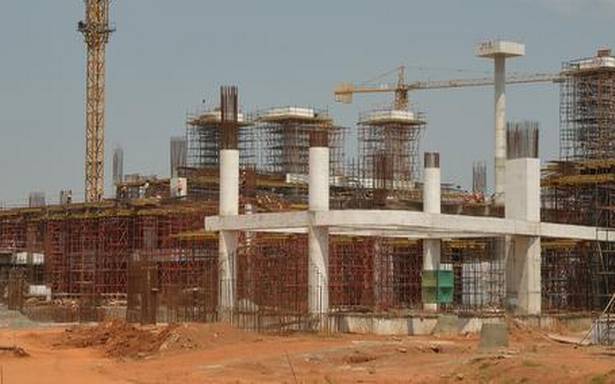 The new terminal building at the airport is coming up on an area of 75,000 square metres at a whopping cost of over ₹950 crore

Non- availability of certain key materials from other States due to the lockdown is impacting construction of the new integrated passenger terminal building of the Tiruchi airport.

Fabrication works have completely stopped due to the non-availability of industrial oxygen.

"About 55 per cent of the project works has been completed so far. Around 600 labourers are working at the project site," said P. Sree Krishna, General Manager – Projects, Airports Authority of India, Tiruchi Airport.

However, supply of a slew of materials such as granite, flooring materials, toilet fixtures and roof sheets besides spares for the cranes has been cut off, impacting the pace of the ongoing works. Granite had to come from Bengaluru and other materials from Maharastra. But these were not being supplied at present owing to the current pandemic situation, Mr. Sree Krishna said.

With fabrication works having been stopped, erection of trusses — which are rigid structures — had also come to a halt.

Non-availability of industrial oxygen was affecting the fabrication works.

Concreting, laying of approach roads and other civil works were however going on as there was stock of cement and bitumen. Nevertheless, the project works were going on "satisfactorily" at present, Mr. Sree Krishna said and added that all the labourers deployed at the project had been fully vaccinated.

The works were being executed by duly following the COVID-19 related safety protocols and after obtaining permission from the district administration.

The new terminal building at the airport is coming up on an area of 75,000 square metres at a whopping cost of over ₹950 crore. The terminal has been designed to handle 2,900 passengers during peak hour and to handle around 3.6 million passengers a year. It would be equipped with 48 check-in counters and 10 boarding bridges.

Construction of a new Technical Block-cum- Air Traffic Control Tower at the Tiruchi airport also forms part of the project. The Airports Authority of India had already given height clearance for the proposed new structure. Clearance was given for 46 metres height for the new structure which would be taller than the new integrated passenger terminal building. The site for the construction of the new tower has been identified, he said.