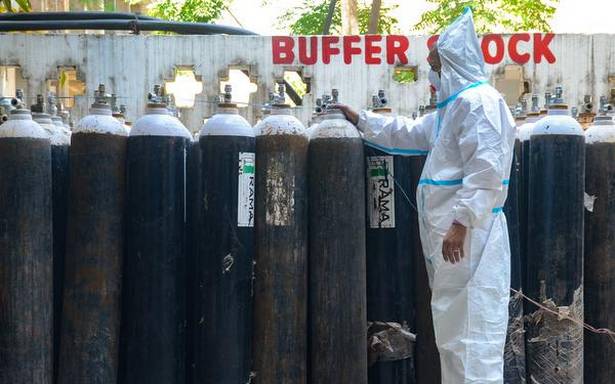 “Four deaths reported in Batra hospital Jammu occurred because of routine medical reasons, not because of shortage of oxygen,” a statement issued by the administration said

The Jammu and Kashmir administration on Saturday clarified that no patient has died due to shortage of oxygen supply at Acharya Shri Chander College of Medical Sciences (ASCOM) hospital here as regular replenishment is being undertaken as per requirement raised.

The statement comes after family members of a COVID-positive woman claimed that she died at the ASCOM hospital, popularly known as Batra hospital, due to non-availability of the life-saving gas.

"Four deaths reported in Batra hospital Jammu today (Saturday) occurred because of routine medical reasons, not because of shortage of oxygen,” a statement issued by the administration said.

The statement, uploaded by the Department of Information and Public Relations on its Twitter handle, said as far as oxygen supply to Batra hospital is concerned, 253 oxygen cylinders were supplied to it in the last 24 hours and regular replenishment is being undertaken as per requirement raised.

"The supply of oxygen is being closely monitored,” the statement said.

It said while there is an increasing demand due to a rise in the number of COVID cases, no patient has died due to shortage of supply of oxygen.

"Please do not pay heed to rumours,” the administration said.

Earlier during the day, noisy scenes were witnessed at Batra hospital here after relatives of the COVID-positive woman claimed that she died because of the non-availability of medical oxygen.

"Our patient was undergoing treatment at the hospital for the past 17 days and died painfully of suffocation due to non-availability of oxygen,” one of the protesting relatives of the deceased said.

However, the hospital management denied the charge and said there was no shortage of oxygen in the hospital.

“Four deaths have taken place today (Saturday) due to various reasons but not because of shortage of oxygen. We have 32 more patients on oxygen support,” hospital principal Pawan Malhotra said.

He said the hospital has not taken any new patients for the past three days because of the heavy rush and also gave an option to the admitted patients to take voluntary discharge if they desire so.

“The (oxygen) supply is coming regularly and we constantly remain in touch with the government to ensure that there is no shortage of oxygen,” Mr. Malhotra said.