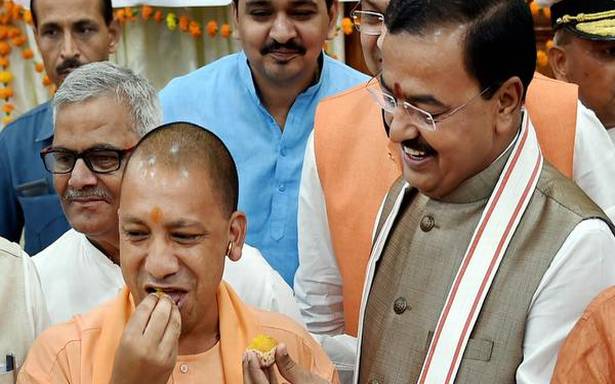 Those raising questions over their relationship are ‘nadaan log’ or innocent people, he says

Amid a popular perception of differences between them over the question of leadership ahead of 2022 Assembly polls, Uttar Pradesh Deputy Chief Minister Keshav Prasad Maurya has said that his relationship with Chief Minister Yogi Adityanath is “so strong” that “no force in the world can break it”.

Those raising questions over their relationship were “nadaan log” or innocent people, Mr. Maurya said in response to a question at a two-day conclave on the State election hosted by Doordarshan on Friday.

Ever since the BJP came to power, with Mr. Adityanath nominated for the Chief Minister’s post by the central leadership, there has been a constant discussion on the uneasy relationship Mr. Maurya shared with him. On various platforms, the opposition parties, especially the Samajwadi Party (SP), have tried to project that Mr. Maurya was insulted and sidelined by a Adityanath-led government.

Belonging to the OBC Kushwaha/Maurya community, Mr. Maurya’s elevation, first as State BJP chief, was part of the BJP’s larger strategy to consolidate the non-Yadav OBC votes ahead of the 2017 election.

However, many of his supporters had expected he would sooner or later be projected as the chief minister face. After Mr. Adityanath was chosen, SP president Akhilesh Yadav often used it to mock Mr. Maurya to drive home a narrative that the BJP used the OBC votes to come to power on anti-Yadav sentiment but was not willing to elevate a leader from the community to the top post in the State.

Fuel was added to the fire when Mr. Maurya himself on several occasions displayed reluctance to directly name Mr. Adityanath as the face of the party ahead of the polls.

In June 2021, amid speculation of differences within the BJP over the question of leadership ahead of 2022 polls, Mr. Adityanath called upon Mr. Maurya over lunch. Though Mr. Adityanath chose the occasion to offer his “blessings” to Mr. Maurya’s newly-wed son and daughter-in-law, his visit, in a show of unity among with senior RSS leaders, to Mr. Maurya’s residence two blocks from his own on the Kalidas Marg here, was not bereft of political significance.

When Mr. Maurya was asked about this on Friday, he downplayed the visit, saying Mr. Adityanath had visited his residence several times.