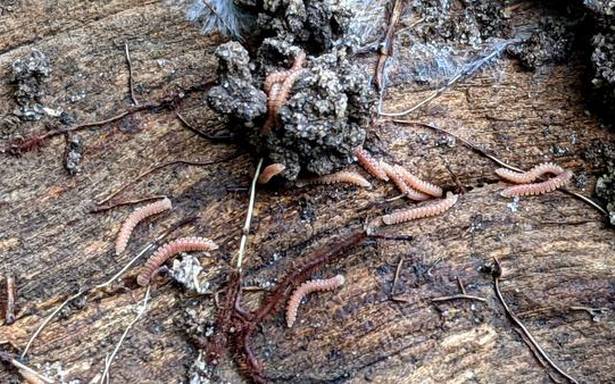 Team from Christ College makes the discovery in Kannur

A new species of millipede, just 3 millimetres long, has been discovered from a sacred groves in Kannur.

The species has been discovered in a study conducted by the Department of Zoology, Christ College, Irinjalakuda, to understand the importance of biodiversity of sacred groves in Malabar. The millipedes have been found in a grove named Thekkumbadu Koolom Thazhekavu. The 20-hectare grove is located on an inland island, surrounded by mangroves.

“These millipedes dwell under the rotting plant debris in the moist soil of the grove. Its body is pale pink and possesses 20 segments in males and 19 segments in females. The eyeless millipede is characterized by 34 pairs of pale yellow legs. They sense their surroundings with a pair of very small but specialised antenna,” says Sudhikumar A.V., Head, Department of Zoology, Christ College, who led the study.

Aswathy M. Das, research scholar, Centre for Animal Taxonomy and Ecology (CATE), the biodiversity research lab associated with the college, and Sergi I. Golovatch, diplopodologist, Russian Academy of Sciences, Moscow, are the members of the study team.

“The body of these millipedes is flat. They belong to a small millipede family called Pyrgodesmidae in the genus Klimakodesmus. The species is named Klimakodesmus bilobocaudatus,” says Dr. Sudhikumar.

These millipedes consume fallen leaf litter, and may process some 15%-20% of calcium input into the soil. Hence they play an important role in increasing soil fertility. Female millipedes can lay up to 250 eggs by the end of a breeding season (monsoon season), the study says.

The fact that a different species of millipede from the same genus has been found in Sri Lanka makes this a significant discovery, says Dr. Sudhikumar. “The presence of this slow dispersal organism is further evidence of the connection between India and Sri Lanka.”

This finding is also important as no progress has been made in the study of indigenous millipedes in India since the studies during the colonial period. So far, only 57 species of millipedes have been found in Kerala, all discovered before Independence, he adds.

The findings are published in the latest issue of Zootaxa, an international scientific journal published from New Zealand.