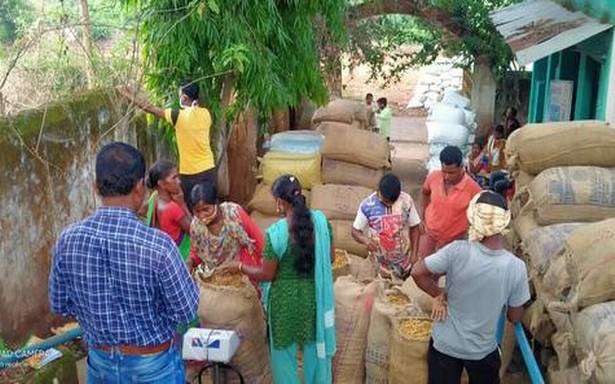 At a time when people are losing livelihoods due to frequent lockdowns in the COVID-19 pandemic, women growing turmeric in Odisha’s Koraput district appear to have found a foothold in a market that promises a perennial return for their organic crop.

The turmeric grown in the Laxmipur block of Koraput district is distinct as it contains between 5.5% and 6.66% of curcumin. The presence of curcumin increases medicinal value of the turmeric.

“The turmeric had, however, never given them the kind of return it should have given. IFFCO Kisan, which is into marketing of spices, recently placed an order for 20 metric tonnes of turmeric from turmeric producers groups promoted by the Odisha Rural Development and Marketing Society (ORMAS), a government agency, and a women’s self help group. They successfully delivered the turmeric consignment,” said Roshan Karthik, Deputy Chief Executive Officer of ORMAS, Koraput.

Turmeric is being procured from the villages of Champi, Timajhola, Konapadi, Lachmani, Toyaput and Pipalpadar. ORMAS had provided financial support to self help group, which used the assistance to procure turmeric from individual farmers.

“IFFCO Kisan offered a price of ₹94 per kg, which was unheard of in the region. Earlier, middlemen used to procure a kilo of turmeric at a price from between ₹75 to ₹80. Now, farmers will get around ₹92 per kg. Farmers are now confident they will get a better price for their produce,” said Mr. Karthik.

He said that the company was interested in procuring 500 metric tonnes of turmeric every year. Now, the exposure of turmeric farmers, mostly tribals, to new markets, has instilled new confidence. In a backward region like Laxmipur, people have started bargaining with traders for securing better prices for their produce.

Apart from Koraput, Odisha’s Kandhamal district is also famous for organic turmeric and has received the geographical indication (GI) tag. But farmers have suffered as the procurement was badly affected due to pandemic. Unscrupulous traders were not offering prevailing marketing prices to farmers, taking advantage of the situation.