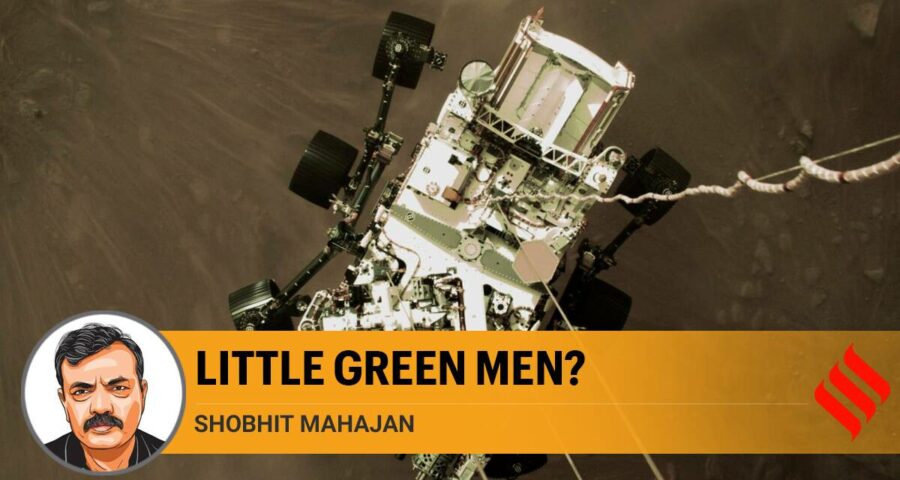 Finding life at another place in the universe might just make us a little more humble when it comes to treating Nature as our exclusive domain. At 8:55 pm GMT on February 18, a whole new phase of space exploration began — NASA’s Martian rover, Perseverance, touched down on Martian soil after a six-and-a-half month journey from Cape Canaveral. The nail-biting landing had all the elements of the last over of a T20 final. Because of the extremely challenging terrain in which the landing took place, it was a very tricky operation which nevertheless ended in a dream landing. What is more, soon after landing, the rover transmitted the first images from the dusty, rock-strewn Martian surface.

Perseverance is part of a multi-decadal Mars exploration programme which aims to study the formation, evolution and structure of the Red planet. The programme will also investigate the possibility of past or present life as well as the potential for human exploration of Mars.

This was, of course, not the first landing on Mars — starting in 1971 when the Soviet Mars 3 lander became the first spacecraft to safely land on the planet to NASA’s InSight lander in 2018, there have been several landings over the last five decades. In addition to the landings, which are technically very challenging, there have been many missions which have explored Mars from orbiting spacecraft. Our own, Mangalyaan, has been in an orbit around Mars for over six years now.

What makes Perseverance different is the scale of the operation and its complexity. Begin with its size — almost as big as an SUV, it is about 10 feet in length, 7 in width, 3 feet in height and weighs more than a ton. Although the six-wheeled machine resembles a Lego model, it is extremely advanced technologically. Powered by 5 kg of plutonium dioxide, Perseverance hosts a whole array of very sophisticated navigation, communication, imaging and scientific instruments.

The number of instruments on board the rover makes it into a veritable mobile lab. These include instruments for measuring environmental parameters like temperature, wind speed, those for high-resolution images of the surface materials etc. There are also the delightfully monikered SHERLOC (Scanning Habitable Environments with Raman & Luminescence for Organics and Chemicals) and WATSON (Wide Angle Topographic Sensor for Operations and eNgineering). SHERLOC will search for chemicals which could indicate the presence of life while WATSON would provide close-up images of the samples which are to be investigated. And yes, WATSON can also take selfies of the rover itself!

There are also several firsts in this mission. The rover carries two very sensitive microphones which will listen to Martian sounds like the wind or the rover moving on the Martian soil. Most interestingly, it carries a small, 2 kg helicopter in its belly which it will lower to the surface. If all goes well, the Ingenuity Mars Helicopter would be the first aircraft to fly on another planet. This will be a technological tour-de-force since the Martian atmosphere is extremely thin compared to the Earth.

The rover landed in a depression called the Jezero crater which is at the edge of what was once a river delta when Jezero was filled with water. The crater is surrounded by high cliffs, large boulders and sand dunes, all of which made the landing extremely treacherous. Interestingly, while descending, the rover took pictures of the terrain below and compared them with the maps stored on-board to make on-the-fly corrections to keep away from the hazardous areas and land safely.

The rover is to move around the crater and collect rock samples. Thus what we have here is a roving, robotic Martian geologist. What is more, it will do this for over one Martian year (or two Earth years) during which it would have travelled over 15 km. It will not only collect the samples but leave them at various pre-determined sites for future Martian rovers to collect and bring back to earth.

What makes Jezero interesting is that it is the oldest terrain to be explored on Mars — some of the minerals there might have formed almost 3.5 billion years ago. This is important because scientists think that it is in the oldest periods of time that Mars would have been most conducive to life. Other Martian probes, most notably Curiosity, which landed on Mars in 2012, have also searched for possible signs of life. However, despite some initial promising results, there has been no evidence of any kind of life yet.

Perseverance carries on this search and the hope is that because of its location and scale of operations, it might give us a shot at answering the question as to whether life ever existed on Mars. In the last few decades, the search for life in the Universe has moved from being a purely speculative enterprise to a serious research endeavour. After all, as Arthur C Clarke, the doyen of science and futuristic fiction, is reported to have said, “Two possibilities exist. Either we are alone in the cosmos or we are not. Both are equally terrifying”.

The idea of establishing space colonies on Mars and treating Mars as an exotic tourist destination for the super-rich is wishful thinking at best and commercial hype at worst. Nevertheless, the goal of sending human beings to Mars for exploration certainly looks feasible in the next decade or so. One of the things that would be required would be oxygen in large quantities — not just for breathing since the Martian atmosphere is mostly carbon dioxide, but also for making liquid oxygen propellant for the return flight to earth. MOXIE is an instrument on Perseverance which will be testing the production of oxygen from carbon dioxide. If this is successful, then one of the key issues in human flight to the Red planet would be resolved.

Even though it is unlikely that Little Green Men would ever be found on Mars, the discovery of life as it exists or had existed on Mars would be a momentous one. Perseverance might or might not find signs of life on Mars. But one thing is certain — it is a significant step in humanity’s pursuit of understanding the cosmos and our place in it. And finding life at another place in the universe might just make us a little more humble when it comes to treating Nature as our exclusive domain.

This article first appeared in the print edition on February 23, 2021 under the title ‘Little Green Men’. Mahajan teaches physics at University of Delhi