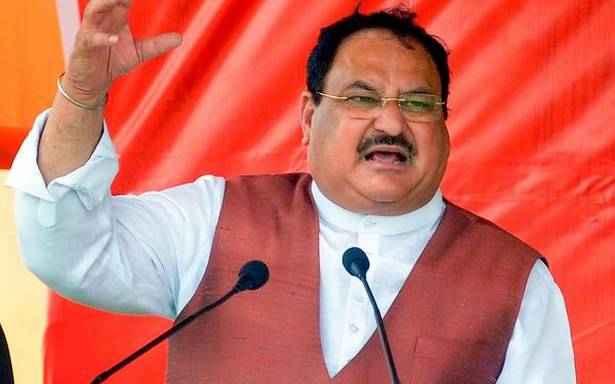 This kind of crackdown on local BJP leaders is due to party’s growing popularity, he claims

﻿BJP president J.P. Nadda on Monday flayed the Telangana Rashtra Samithi (TRS) government after it arrested State BJP president Bandi Sanjay Kumar. In a press statement, he termed the arrest a “murder of democracy and constitutional rights in Telangana”.

“But the KCR government was so scared of this peaceful protest by the BJP State president, party workers and aggrieved teachers and employees that it ordered the police to launch an attack on the peaceful protest. This massive use of force and planned attack and violence against the BJP leaders, workers, teachers, and employees is nothing but an act of political vendetta and political anarchy prevailing in Telangana. The police first cut the iron gates of the office and then forcibly entered where the peaceful protest was going on. The police then launched a brutal attack on the BJP State president and other party workers, including women leaders and workers, and then arrested them,” he observed. This kind of crackdown on local BJP unit leaders was due to the party’s “growing popularity” in the State and it would continue with its protests, he added.

Mr. Kumar has been remanded in 14-day judicial custody by the Karimnagar district court.