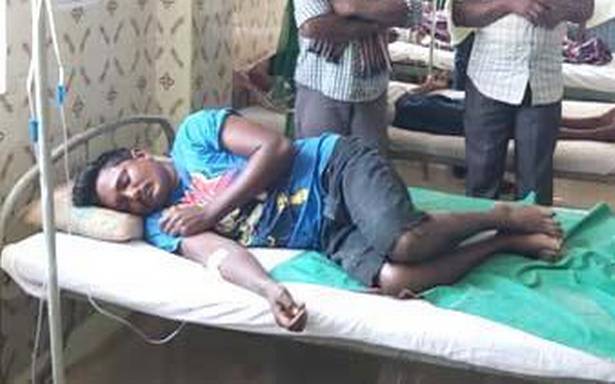 No reason to panic, say officials

The number of patients suffering from the mysterious illness at Pulla village of Bhimadole mandal in West Godavari district, Andhra Oradesh increased to 29 on Wednesday.

“The patients are showing symptoms of epilepsy, and suffering from giddiness, fever, vomiting and convulsions,” according to doctors treating them at the local PHC. “The condition of the patients is stable and there is no need to panic. Medical camps have been set up and ambulances are kept ready at Pulla and the neighbouring habitations,” officials said.

Health Minister Alla Kali Krishna Srinivas visited the village, along with District Collector R. Mutyala Raju, Joint Collector Himanshu Shukla and a team of doctors. Mr. Srinivas also visited the colonies and inspected the sanitation, drinking water supply, sewage system and clearing of garbage in the village. He also interacted with the family members of the patients.

“We have shifted a few patients to the district headquarters hospital and their condition is stable. Instructions have been given to inquire into the reasons for the outbreak,” the Minister said.

Mr. Himanshu Shukla, who was monitoring the situation at Pulla, said about 30 ASHA workers and 10 ANMs were conducting a door-to-door survey to monitor the situation. “In all, 20 doctors, who include three physicians, and five medical teams have camped in the village. The disease is confined only to Pulla,” Mr. Shukla told The Hindu.

“We have collected the blood samples of patients, as also the samples of food, water, vegetables, fish, chicken and mutton, and sent them to the Regional Forensic Science Laboratory (RFSL). The situation is fully under control,” he said.

The district administration has kept 95 beds ready – 50 in Eluru district headquarters hospital, 30 in Bhimadole Community Health Centre and 15 in the PHC.

“A team of doctors from Vijayawada is attending to the patients round the clock,” Mr. Shukla said.