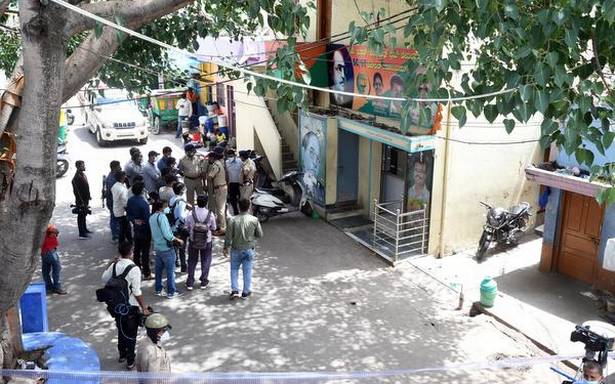 Four police teams have been formed to track down those who hacked 45-year-old Rekha Kadiresh to death in front of her office at Cottonpet on Thursday morning.

The police are having a tough time getting people to come forward. “The attack was so brutal that although many people had gathered at the office and witnessed the murder, they ran away. No one is coming forward to give their statements,” a police officer said.

Though the CCTV cameras outside the office had been turned away, the police have scanned footage from other cameras and have identified three men. “Two of the suspects were close confidants of the councillor. We have footage of them fleeing the scene on foot. The third suspect helped them escape,” said a senior police officer.

The brutality of the attack and the fact that it was carried out in broad daylight has made this a high-profile case. Both Chief Minister B.S. Yediyurappa and Home Minister Basavaraj Bommai called Bengaluru Police Commissioner Kamal Pant directing him to crack the case at the earliest.

BJP city unit spokesperson N.R. Ramesh alleged political rivalry as the motive. “She was a popular leader in the area, and the party had decided to nominate her again and she was expected to win. With the council polls approaching, other aspirants desperate to win the seat from Chalavadipalya seem to have killed her,” he claimed.

Mr. Ramesh, while expressing confidence that the police would arrest the accused, claimed there were larger forces at play. He cited the murder of the councillor’s husband, Kadiresh S., a rowdy-sheeter, who was hacked to death near Muneshwara Temple in Chalavadipalya. “There were bigger forces behind the murder of Kadiresh in 2018, which was never probed. The police were content with filing a charge-sheet against those who surrendered voluntarily,” he said.

Though he did not make any direct allegation against him, Mr. Ramesh said Chamarajpet MLA B.Z. Zameer Ahmed Khan, in whose constituency Chalavadipalya lies, was encouraging “anti-social elements”.

In February 2018, four armed men murdered Rekha Kadiresh’s husband, S. Kadiresh, near Muneshwara temple in Cottonpet. This murder was executed in a similar manner — in daylight and in front of eyewitnesses. According to the police, he was named in several criminal cases.