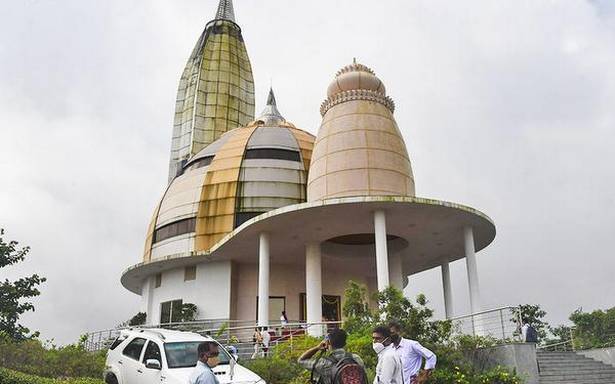 Octogenarian-physician Madan Mohan Naik dreamt during his childhood of building a structure over the sprawling Mudipu Gudde (hillock) that he saw from his house.

After over 14 years of efforts, Dr. Naik realised his dream with help from his friends and philanthropists in opening Krishna Dhyana Kendra. This also houses the Tulu Nada Siri museum where Dr. Naik is exhibiting several artefacts that relates to Tulu Nadu, Indian history and science.

Located about 25 km away from the city, this meditation centre is nestled in green surroundings. From the centre, one can have a good view of the hill ranges and the Netravathi flowing by.

The tall doomed structure acts as the meditation centre where an idol of Lord Krishna is installed. A bust of Swami Vivekananda and a statue of Gautam Buddha are placed outside. And, the path leading to the centre has innumerable quotes from the Bhagavad Gita and other verses.

The museum is in the cellar of the structure. Among the interesting artefacts displayed include the photographs of the visit of the former Prime Minister Jawaharlal Nehru to Mangaluru in 1951. It gives details such as the ₹200 spent by the organisers for the public function held on that day.

Collections related to Yakshagana, Kambala and architecture of Tulu Nadu are also displayed. There is a wall frame displaying photographs of K.S. Hegde, U. Srinivas Mallya and other prominent persons from the coastal area.

There are interesting collections related to the evolution of human beings, treatment mechanism and other aspects of science.

An open air theatre with 600 seats has been built behind the kendra for staging cultural programmes. There are six rest rooms and a conference hall for visitors.

“A trust has been formed and it is entrusted with the task of making good use of this centre and also maintain it,” Dr. Naik said.

In a formal inauguration function held on Monday, head of Ramakrishna Mutt, Mangaluru, Swami Jitakamananda said that the Dhyana Kendra is ideal for meditation. People should make good use of the facility.