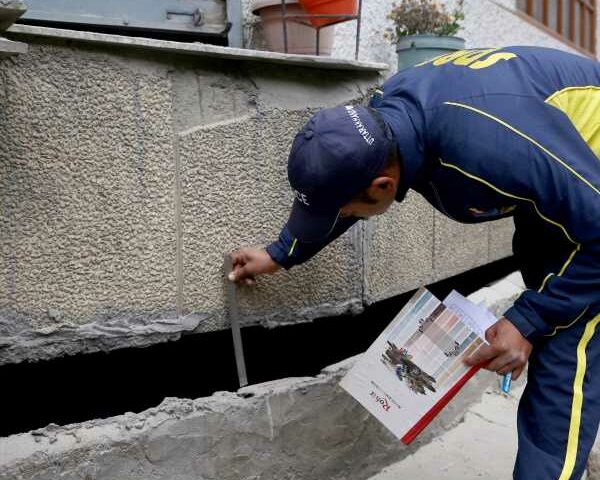 ‘There were literally thousands of houses with cracks.’
’40 percent of the town has been affected.’ Dr Ravi Chopra, who heads the People’s Institute in Dehradun, recently travelled to Joshimath to get a first-hand impression of the tragedy that has engulfed the town.

“Eight or nine scientific institutions including ISRO, the National Remote Sensing Centre and the Wadia Institute of Himalayan Geology are working towards determining the cause of this tragedy. When identified, appropriate measures will be taken to ameliorate the situation,” Dr Chopra tells Rediff.com Senior Contributor Rashme Sehgal. You went to Joshimath to get a first-hand appraisal of the situation.

There is a lot of anger against the NTPC and that is reflected in the anti-NTPC posters put up across the town asking NTPC to go back.

I visited the Dalit colony there. They were visibly angry. They had highlighted this problem way back in February 2021. but to little avail.

Red crosses had been put outside their homes. When I asked them what they signified. They said they did not know.

I felt officials were talking only to officials, not to the common people living there.

In his second visit to Joshimath, Chief Minister Dhami discussed the issue with officials and then went back to Dehradun.

One of the main concerns voiced frequently by the public was that they wanted to know what compensation package were they going to receive. There was no clarity on this.

When the NDMA officials issued a gag order on ISRO ,who had released data showing that Joshimath had sunk 5.4 cm between December 27 and January 8, the public there became even more apprehensive about what could happen to them. Their fear was palpable.

On Friday morning, a person living near Joshimath sent out a message that between certain hours explosions were being heard. This again caused the public to panic.

The NTPC clarified that this was part of some ongoing road project and that no work was going on in the Vishnughad Tapovan project. What did you feel at a personal level after visiting Joshimath?

The nature and extent of the disaster left me very worried.

What made me even more worried is a statement reportedly made by the Uttarakhand chief secretary (Sukbir Singh Sandhu) that the area affected by the subsidence was around 350 metres.

During my stay there, I moved across many parts of the town — the northern part which falls just below Auli and then on to Manohar Bagh, Gandhi Nagar and Marwari which lies at the toe of the spur.

There were literally thousands of houses with cracks. Practically 40 percent of the town has been affected. It’s a very sizeable population.

A report recently published stated that parts of Joshimath may have sunk over two feet according to a ground survey.

We measured the cracks when we were there and they were definitely increasing in depth.

There is a scientific aspect to the disaster, but there is a social side also and that is reflected in the government’s inability to interact with the people there.

Now the situation has got worse with the government placing a gag order.

A former BJP MLA from that town has been distributing relief supplies which have not been appreciated.

The public’s response is that we have enough stuff in our homes. What we need is a sense of security.

We believe we are on the brink of an even bigger disaster. We need to be kept informed about what is happening.

The result is the people there are now generating their own information and spreading it to each other. What is most distressing is how the government chose to ignore the warning signs.

The officials and bureaucracy are extremely lethargic, but this question needs to be addressed to them.

The Indian Army had stationed an entire brigade in Joshimath given its proximity to the China border. Were they not in the know about what was going on?

I understand from a recent tweet that the Chief of Army Staff Manoj Pande had recently stated that the army has temporarily moved its units out of Joshimath to an alternative accommodation.

You have been quoted as saying that circumstantial evidence points towards the NTPC’s Vishnugad Tapovan tunnel as being responsible for this disaster.

I said there is scientific and circumstantial evidence along with local people’s experience that this disaster is primarily due to the construction of this tunnel.

The people’s own evidence substantiates this. But NTPC officials state that the tunnel is situated some distance from Joshimath.

The tunnel is located 1.1 kilometres away from Joshimath if we look at the tunnel horizontally.

Larsen & Toubro got a study commissioned by three German scientists who pointed out that a tunnel boring machine got stuck in the tunnel on three separate occasions which caused a heavy ingress of water to escape from the large cracks that had formed inside the tunnel. The third ingress took place in October 2012.

What is the way forward? Is there any hope for Joshimath?

Eight or nine scientific institutions including ISRO, the National Remote Sensing Centre and the Wadia Institute of Himalayan Geology are working towards determining the cause of this tragedy.

When identified, appropriate measures will be taken to ameliorate the situation.

They are looking at this problem from different angles following which comprehensive action will be taken. They have asked for two weeks to determine the causes. Can Joshimath be saved?

There is a very severe threat. Forty percent of the mountain slopes have been affected.

There is evidence that the cracks are getting wider.

I fear a much bigger disaster is looming ahead.

Do you think there should be a ban on the construction of hydro projects in the upper Himalayas?

My reply would be to ask what is the logic of doing all this. We have to keep in mind that this is a very fragile region full of geological surprises.

By this, I mean the creation of certain formations which can create unknown surprises.

Construction in this region must be preceded by serious scientific and geological investigation.

Projects are being executed with a target date in mind. Prime Minister Modi announced that the Char Dham 2015 be completed by December 2018. The date has since been extended to 2020, and 2021, but so far around 560 kms from the 880 km (to be built) has been completed.

When a project of this magnitude is started, we must look at the fragility of the ecosystem and also its changing weather patterns.