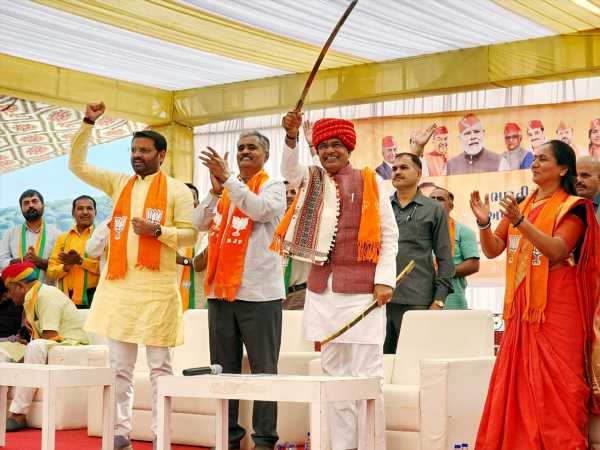 Gujarat assembly poll result may have thrilled the Bharatiya Janata Party, but a section of party MLAs and leaders in Madhya Pradesh is fearing a replication here of the strategy in the adjoining state, where the entire cabinet was replaced last year and several sitting MLAs were denied ticket.

Though different voices are emerging from within the ruling BJP in Madhya Pradesh over the issue, several saffron party MLAs, including senior leaders, appeared worried about a possible repeat of the ‘Gujarat formula’ to overcome anti-incumbency in the central state, where Assembly elections are due in end-2023.

The BJP has been in power in Madhya Pradesh for almost 20 years.

“We need to plough fields to prepare land for agriculture and remove rancid roots before sowing new seeds, which we can term as the Gujarat formula in existing political set-up,” said an MP BJP functionary on condition of anonymity when asked about speculation over a Gujarat-like shake-up in Madhya Pradesh.

When queried by reporters over the issue recently, BJP national general secretary Kailash Vijayvargiya, without elaborating on the ‘Gujarat formula’, said, “Not only Madhya Pradesh, it will be implemented in the entire country.”

“Gujarat has become an ideal state. The vote share in favour of the BJP has gone up (party garnered more than 50 per cent vote share in Gujarat) even after winning elections seven times. This has happened (in a state) for the first time after independence,” he said.

Vijayvargiya, who had been party in-charge of West Bengal, said Communists ruled the eastern state for a long time (for 34 years), but their vote percentage kept decreasing in every election.

“On the contrary, the BJP’s vote share grew to 54 per cent (in Gujarat) from 42 per cent in 1995 (when the party came to power). Those who abuse (Prime Minister) Narendra Modi should learn from his work and politics,” he said.

Asked why the BJP could not retain power in Himachal Pradesh, where election result was announced along with that of Gujarat on December 8, Vijayvargiya said in the hill state, the ruling party changes every five years.

In the just-concluded Assembly polls, the Congress came to power in Himachal Pradesh.

In Gujarat, the BJP replaced its then-chief minister Vijay Rupani and his entire set of ministers in September last year.

A new Council of Ministers with Bhupendra Patel as CM was sworn-in just a year before the assembly polls in Gujarat.

Besides, in the run-up to elections in December, the BJP had replaced 45 sitting MLAs with new faces, of whom all but two won.

After making these large-scale changes, the BJP posted a record-breaking victory in Gujarat, where it bagged 156 seats in the 182-member House and won assembly elections for the seventh time in a row.

Asked about BJP’s Gujarat poll strategy, Yashpal Sisodiya, a three-time party legislator from Mandsaur in Madhya Pradesh, told PTI that changes need to take place as and when required.

“A lot depends on local circumstances and opinion of leaders sitting in the government and the organisation,” Sisodiya said.

On implementation of the successful Gujarat strategy in Madhya Pradesh, BJP legislator from Bhopal’s Huzur seat, Rameshwar Sharma, said it was up to the party leadership to take a call in this regard.

“Whatever decision is taken by the BJP’s national and state leadership, it will be in the interest of the party and people at large,” Sharma said.

However, an MLA from the saffron party openly sought a complete overhaul of the government in Madhya Pradesh like in Gujarat with just a year to go for assembly polls.

After the Gujarat election result was announced, the BJP MLA from Maihar, Narayan Tripathi, had shot off a letter to party president J P Nadda seeking a complete shake-up of the organisational-governance structure in MP to ward off anti-incumbency ahead of polls.

Tripathi, who successfully contested elections on Congress and Samajwadi Party (SP) tickets earlier, said the BJP must win polls in MP and hoped his request would be accepted by the central leadership.

Senior journalist Girija Shankar, a keen political observer, said the term ‘Gujarat formula’ has been coined by the media.

“The BJP won three consecutive terms in office in Madhya Pradesh (2003, 2008, 2013) because the Congress was not contesting polls actively. And when the Congress fought the elections aggressively, it defeated the BJP in 2018,” he pointed out.

Shankar said there was nothing new in the BJP’s Gujarat strategy on selecting candidates as most political parties deny tickets to nearly 30 per cent of their sitting lawmakers, if one goes by poll data post Independence.

The only new thing in Gujarat was that the BJP replaced the entire cabinet, including the CM, a year ahead of elections, but this cannot be linked to the saffron outfit’s record-breaking victory in the home state of PM Modi, he said.

Shankar believes the Gujarat victory came mostly due to Modi’s personal and emotional connect with the people of the state, where he said, the Congress did not put up a spirited fight and virtually gave a walkover to the ruling party.

“If the Congress contests the Madhya Pradesh elections the way it fought in Gujarat, the BJP can easily win here,” he observed.

After 15 years in power, the BJP lost the 2018 assembly polls in MP, paving the way for the Congress to form a government under the leadership of Kamal Nath with the help of elected independents, MLAs from the Samajwadi Party and the Bahujan Samaj Party.

However, a rebellion by nearly two dozen Congress MLAs loyal to Jyotiraditya Scindia, a Union minister who is now in the BJP, led to the collapse of the Nath government in March 2020.

The BJP subsequently formed its government under the leadership of Chief Minister Shivraj Singh Chouhan.