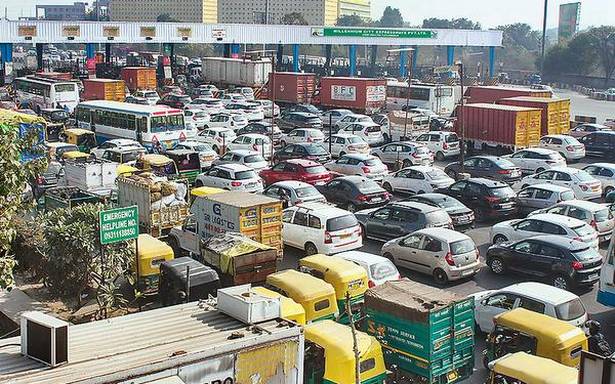 Barriers had to be lifted during peak hours to clear traffic snarls, says NHAI official

The implementation of the National Highways Authority of India (NHAI) directions for mandatory digital payment through FASTags at its toll barriers from Tuesday faced little hiccups at Kherki Daula here with motorists not maintaining sufficient balance.

The barriers had to be lifted once during peak hours to avoid congestion due to long traffic snarls.

NHAI (Gurugram) project director Shashi Bhushan said the implementation went off well but there were a few glitches. He said the problem was mostly caused due to the motorists not maintaining sufficient balance in the FASTags, leading to delays.

“Those without valid FASTags were also made to pay double the toll fee. Hope the people will soon become aware and keep adequate balance in the FASTags,” said Mr. Bhushan.

He added that the situation was being monitored and more marshals could be deployed if needed.

Sohrab Khan, Manager Toll Operations, Millennium City Expressway Private Limited, said the toll barriers were lifted once during the peak hours after the entry of heavy vehicles were allowed around 11 a.m. “The entry of heavy vehicles led to congestion and the barriers had to be lifted to clear the traffic,” said Mr. Khan, adding that overall the implementation was smooth.

Those paying in cash were diverted to extreme left lanes on both sides of the toll plaza to avoid inconvenience to the motorists with vehicles equipped with FASTags.

Earlier 14 marshals were deployed along with Lane Assistants in each of the three shifts, but the strength has now been augmented to 34 for each shift including 15 NHAI marshals.

Mr. Khan said double the toll fee was collected from those without valid FASTags or making cash payment. “It is not possible to identify and segregate those without insufficient balance before they enter the FASTag lanes,” said Mr. Khan.