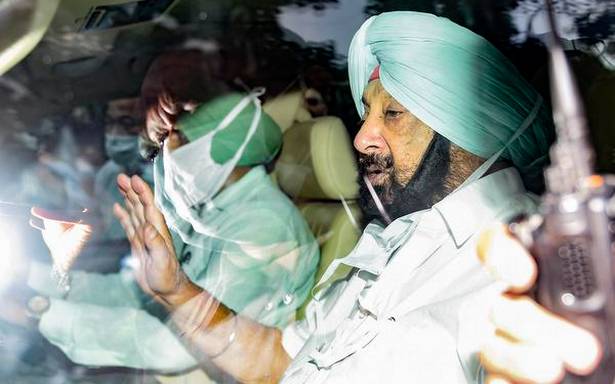 The turmoil in its Punjab unit snowballed into a major crisis for the Congress party on Wednesday, with a group of senior leaders openly challenging the leadership of the Gandhi family, and the former Punjab Chief Minister Capt. (Retd.) Amarinder Singh exploring an arrangement with the Bharatiya Janata Party (BJP).

Polling began at 7 am on Thursday, September 30, 2021, for the by-election to the Bhabanipur seat, where West Bengal Chief Minister Mamata Banerjee is contesting, and two other constituencies amid tight security and stringent COVID-19 measures, officials said.

The Centre has rebranded the 26-year old national mid-day meal scheme to give a hot cooked meal to 11.8 crore government school students from Class 1 to 8, with the Cabinet approving a proposal to rename it as the PM POSHAN (Poshan Shakti Nirman) scheme on September 29.

The turmoil within the Congress in Punjab washed up at the doorstep of Union Home Minister Amit Shah on Wednesday with former Chief Minister of the State Capt. (Retd.) Amarinder Singh meeting Mr. Shah at his residence, setting off speculation that his next political destination could well be the Bharatiya Janata Party (BJP).

Cristiano Ronaldo grabbed a stoppage-time winner as Manchester United came from behind to secure a fortunate 2-1 Champions League Group F win over Villarreal at Old Trafford on Wednesday.

Nipah virus antibodies (IgG antibodies) were detected in bat samples collected by the National Institute of Virology (NIV), Pune, from Kodiyathoor and Thamarassery in Kozhikode district near the panchayat where a Nipah virus outbreak had been confirmed last month.

U.S. Senate Majority (Democrat) Leader, Chuck Schumer called for deeper cooperation between the U.S. and India on the economic and defence fronts.

Royal Challengers Bangalore made short work of Rajasthan Royals, recording a seven-wicket victory at Dubai on Wednesday. Set a target of 150, RCB romped home with 17 deliveries to spare.

Firming up a strategic deal at the Colombo Port in Sri Lanka, the Adani Group will on Thursday sign a build-operate-transfer (BOT) agreement with its local partner John Keells Holdings and the Sri Lanka Port Authority (SLPA), to jointly develop its West Container Terminal (WCT).

‘Will require H-1Bs till talent challenge is tackled globally’

The need for H-1B visas will continue to exist till the ‘talent challenge’ is tackled globally, even though the information technology industry has successfully adopted the work-from-home model amid pandemic-related travel restrictions, said Shivendra Singh, vice president and head of Global Trade Development at Nasscom.