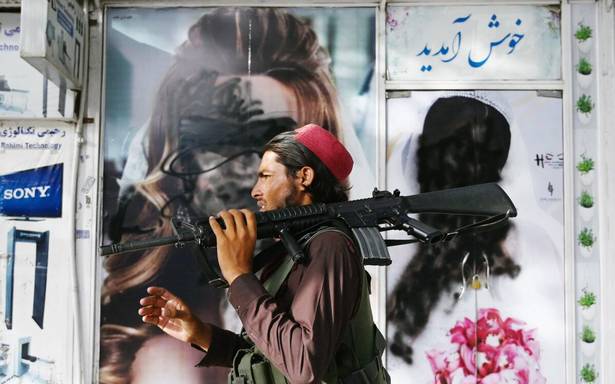 US President Joe Biden said on Wednesday that he is committed to keeping U.S. troops in Afghanistan until every American is evacuated, even if that means maintaining a military presence there beyond his Aug. 31 deadline for withdrawal.

Afghan President Ashraf Ghani on Wednesday defended his decision to flee Kabul in the face of the Taliban advance, describing it as the only way to prevent bloodshed.

No democracy, only sharia law in Afghanistan: Taliban

Afghanistan may be governed by a council now that the Taliban have taken over, while Islamist group’s supreme leader Haibatullah Akhundzada would likely remain in overall charge, a senior member of the group said.

The chief scientist of the World Health Organization is warning of “even more dire situations” worldwide in the coronavirus pandemic if high-income countries start administering vaccine boosters ahead of poorer countries without vaccines.

In view of developments in Afghanistan, External Affairs Minister S. Jaishankar is cutting short his visit to the Americas this week, and will return from the United Nations after chairing over two meetings at the UN Security Council.

Presiding over a United Nations Security Council open debate on technology and peacekeeping, his first as External Affairs Minister, S. Jaishankar announced the rollout of a technological platform in partnership with the U.N., ‘ UNITE Aware’, to help enhance the safety of U.N. peacekeepers.

Alok Sharma, president-designate, United Nations Conference of Parties (COP), said he hoped India would consider more ambitious emissions targets. Mr. Sharma is visiting India as part of a larger international tour building consensus among nations for concrete outcomes ahead of the 26th round of climate talks.

Despite being the country’s fastest quartermiler, Priya H. Mohan had been left out of the Indian 4x400m mixed relay team for the Tokyo Olympics as she was not a national camper.