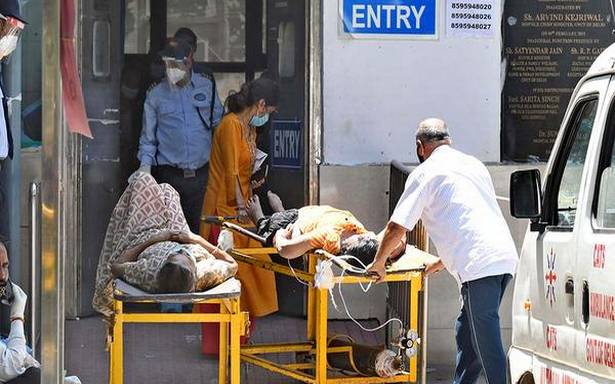 Indian entities, including hospitals and charitable trusts, hoping to receive COVID-19 relief material from overseas individual donors or donor agencies, could be in trouble, unless they are registered under the Foreign Contribution Regulation Act (FCRA) with a stated objective involving provision of medical care.

A heated debate has dominated the Chinese social media attention this past week in the wake of a post linked to an official Communist Party account that mocked India’s COVID-19 crisis, and subsequently polarised opinion among those calling for sympathy and others justifying a comparison of the two countries’ responses to the pandemic.

Requirement of a positive test for the COVID-19 virus is not mandatory for admission to a COVID-19 health facility and no patient will be refused services on any count, the Health Ministry said on Saturday, announcing the revised national policy for admission to various categories of COVID-19 facilities.

India and the European Union agreed on Saturday to relaunch free trade negotiations by resuming talks that were suspended in 2013 for the Bilateral Trade and Investment Agreement (BTIA), as Prime Minister Narendra Modi interacted virtually from Delhi with EU chiefs Ursula Von der Leyen and Charles Michel along with 27 European leaders gathered in Porto, Portugal on Saturday.

The Supreme Court Juvenile Justice Committee, in coordination with UNICEF, highlighted the need to urgently provide care and protect children suddenly made vulnerable by the loss of one or both parents to the second wave of COVID-19.

A meeting of the Bharatiya Janata Party (BJP) legislative party in Assam has been called on Sunday to decode who will be the next Chief Minister of the State. The suspense over the name remained unresolved on Saturday despite incumbent Sarbananda Sonowal and State Health Minister Himanta Biswa Sarma hot footing it to Delhi for meetings with the BJP’s top leadership.

A week after election results, violence continues in Bengal

Nearly a week after the result of the bitterly contested West Bengal Assembly poll was declared, post-poll violence continues in different parts of the State. Even after Chief Minister Mamata Banerjee appealed for peace, announced compensation for those who died and the Union Home Ministry sent a team to take stock of the situation, a string of posts and videos, including fake ones, have surfaced on different social media platforms.

The operator of a major pipeline system that transports fuel across the East Coast said on Saturday that it had been victimised by a ransomware attack and that it had halted all pipeline operations to deal with the threat.

Bomb kills at least 30 people near school in Afghan capital

A blast outside a girls’ school in an area of the Afghan capital populated largely by the Shia Hazara community killed at least 30 people and wounded scores, including students, on Saturday, officials said. Interior Ministry spokesman Tareq Arian told reporters that at least “30 people were killed and 52 wounded” in the blast.

The curbs placed on industrial use of oxygen by the Centre to augment availability of medical grade oxygen for hospitals to save lives of critically ill COVID-19 patients, is impacting exporters by exacerbating a shortage of containers. Thousands of damaged containers, which arrived with import consignments on shipping lines, have not been repaired due to lack of oxygen and are hence not available for exporters, said industry executives.

Two goals from Alexis Sanchez helped Inter Milan celebrate their Serie A title success in style with a 5-1 thrashing of Sampdoria at the San Siro on Sunday. Atalanta’s failure to beat Sassuolo last Sunday ensured leaders Inter were crowned champions for the first time in 11 years, and in their first match since clinching the Scudetto, they showed no sign of letting up.