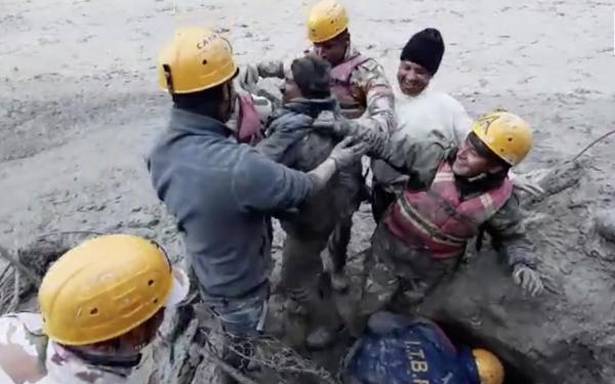 Venudhar Nayak, Commanding Officer of the Indo Tibetan Border Police (ITBP) who led the rescue operation at the tunnel of the NTPC’s Tapovan hydel project, where 12 workers were rescued after a seven-hour operation on Sunday, said the project was completely washed away, and the few houses that remain undamaged on the site were covered in slush upto 20 feet deep.

The water level of the Dhauliganga river at Joshimath flowed at a perilously high level, breaching all records, Central Water Commission officials said after a part of the Nanda Devi glacier broke off in Uttarakhand’s Chamoli district leading to massive floods.

Australian Open | All set for the ‘Nervous Slam’

After a three-week delay, a massive logistical mission and a handful of health scares, a very different Australian Open gets underway on Monday with pandemic protocols providing a backdrop of caution to the action on court.

A farmers’ struggle in Sri Lanka, siding with elephants

With rows of Sri Lankan flags fluttering in the morning breeze, it was not hard to spot the Independence Day event on Thursday in Walsapugala village, in the southern Hambantota district. But paired alongside were black flags, flapping as much, on poles slightly shorter.

President Joe Biden says China is in for “extreme competition” from the U.S. under his administration, but that the new relationship he wants to forge need not be one of conflict.

A huge turnout of women farmers on February marked the mahapanchayats or gatherings against the farm laws in Haryana’s Jat belt, and among the Meo Muslims of the Mewat region in Rajasthan. Bharatiya Kisan Union (BKU) leader Rakesh Tikait, addressing the gathering in Haryana, said that the agitation was a mass movement and would not fail.

The father of a youth, who was killed in the alleged Lawaypora fake encounter on December 30, is among seven booked under the Unlawful Activities (Prevention) Act (UAPA) by the J&K police for organising a protest on Friday, where they demanded the return of the body.

George Shultz, the U.S.secretary of state who survived bitter infighting in President Ronald Reagan’s administration to help forge a new era in American-Soviet relations and bring on the end of the Cold War,died on Saturday at age 100, the California-based Hoover Institute said.

Kalyani-based scientists have found the biological mechanism behind the significantly faster spread of a variant with D614G mutation in Europe and North America but not in East Asia.