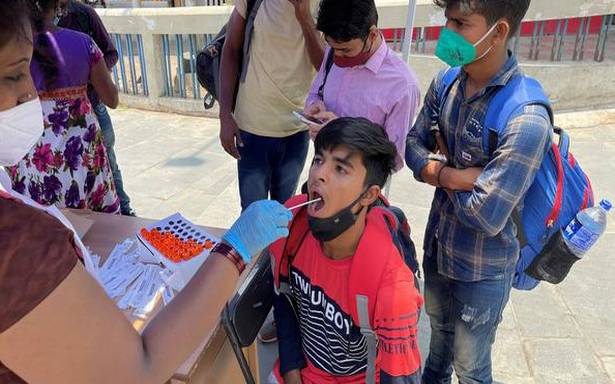 Prime Minister Narendra Modi on Monday said yoga remains a “ray of hope” as the world fights the coronavirus pandemic and asserted that in these difficult times it has become a source of inner strength.

The Patna High Court has pulled up the Bihar government again for not maintaining its records of births and deaths during the COVID-19 pandemic and said that State’s reluctance to publish the number of deaths was “uncalled for” and was “not protected by any law”.

A group of students who have just completed Class12 are objecting to the proposal to use a common entrance test for admission to all Central universities, including those such as Delhi University which have used only Class 12 board marks as the criteria so far.

The Lakshadweep administration, which has been facing widespread protests over its policies, has mooted a proposal to shift its legal jurisdiction from the Kerala High Court to the Karnataka High Court, officials said.

The new IT rules of India were framed after extensive consultation with stakeholders and are meant to protect the rights of online users, India has conveyed to the Human Rights Council in Geneva. The statement came soon after experts at the U.N. said the Rules are not in line with international human rights principles. India maintains the concerns of the experts are “highly misplaced”.

Locked in a tussle with his uncle over the control of the Lok Janshakti Party, Chirag Paswan on Sunday attended a national executive committee meeting in Delhi and said he would hold a road show across Bihar from July 5 on the occasion of his father and party’s founder Ram Vilas Paswan’s birth anniversary.

As U.S. troops leave Afghanistan, Biden to meet with Ghani in Washington

U.S. President Joe Biden will meet Afghanistan’s President Ashraf Ghani and the Chairman of its High Council for National Reconciliation, Abdullah Abdullah, at the White House on Friday, Press Secretary Jen Psaki said on Sunday in a statement released by the White House.

Two senior leaders of the BJP are due to visit Uttar Pradesh for a two-day tour starting Monday as the party continues its preparation for the 2022 Assembly polls.

The COVID-19 pandemic is not a “one-time disaster”, like an earthquake or a flood, for which victims can be compensated with just money, the Centre has told the Supreme Court. The virus is an ongoing pandemic which will continue to attack in waves. A “broader approach” is essential. The government was responding to petitions in the Supreme Court to pay ₹4 lakh compensation to the families of every COVID-19 victim.

Amid the on-going turmoil in the Punjab Congress, Pradesh Congress Committee (PCC) chief Sunil Jakhar targeted Captain Amarinder Singh Cabinet’s decision to give government jobs to the sons of two sitting Congress legislators and demanded scrapping of its decision.

COVID-19 | Health infrastructure has increased up to 45-fold to brace successive waves, Centre says in SC

The Centre told the Supreme Court that the nation’s health infrastructure has increased up to 45-fold to brace successive waves of COVID-19 pandemic. The government also informed the total cumulative vaccine coverage is 27.23 crore doses as on June 19. The total cost, including payment, advance and operational cost, has been ₹9,504.315 crore.