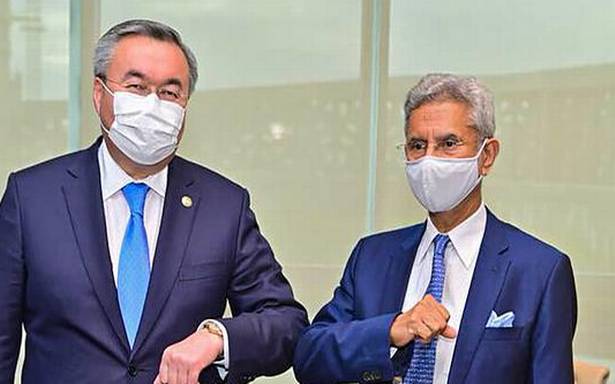 Worries over growing violence and Taliban gains in Afghanistan overshadowed External Affairs Minister S. Jaishankar’s meetings ahead of a connectivity conference here on Thursday, as he called on Afghanistan President Ashraf Ghani and met the U.S. Deputy National Security Adviser and Special Envoy, as well as other Foreign Ministers.

Maharashtra again saw a marginal case rise on Thursday, reporting a spike of 8,010 new COVID-19 cases as opposed to just 7,391 recoveries, as the active case tally, which had dipped in the past few days, rose incrementally to 1,07,205.

The fault lines within the Punjab Congress were exposed on Thursday with Chief Minister Captain Amarinder Singh and former Minister Navjot Singh Sidhu holding separate meetings with their supporters after reports emerged that Mr. Sidhu could be the next Punjab Congress chief.

Chief Justice of India N.V. Ramana’s remarks in open court on Thursday sends a strong message to the government that the Supreme Court is prima facie convinced that sedition is being misused by the authorities to trample upon citizens’ fundamental rights of free speech and liberty.

The Andhra Pradesh government announced 10% reservation for the Kapu community and other Economically Weaker Sections (EWS) for appointments in the initial posts and services in State government in accordance with the Constitution (103rd Amendment) Act, 2019

The European Medicines Agency (EMA) has not received any application from the Serum Institute of India for authorisation of the COVID-19 vaccine, Covishield.

WhatsApp banned 2 million Indian accounts to prevent harmful behaviour and spam on its platform between May 15 and June 15, according to the company’s first monthly transparency report released on Thursday.

Ahead of the Monsoon session that begins on June 19, the Lok Sabha Secretariat has issued separate letters to Sisir Adhikari and Sunil Kumar Mondal (Trinamool Congress) and K. Raghu Ramarishna Raju (YSR Congress), after their parties petitioned Speaker Om Birla, seeking their disqualification under the Anti-Defection Law.

Gira Sarabhai, co-founder of NID, passes away at 98

Gira Sarabhai, co-founder of the renowned National Institute of Design (NID) in Ahmedabad and a pioneer of design education in India, passed away in Ahmedabad on Thursday.

Is the Indian stock market in a bubble? | The Hindu Parley podcast

Since the nationwide lockdown announced by the Prime Minister in March 2020, the Indian economy has faced its worst contraction in history. Yet, the country’s stock indices, the Sensex and the Nifty, have almost doubled in price from the low that they hit in April 2020. Many analysts and even the Reserve Bank of India now believe that stocks are in a bubble. Here we discuss the current state of Indian markets.

To make the post-pandemic recovery more inclusive and sustainable, financial inclusion would continue to be a policy priority for the RBI, Governor Shaktikanta Das said at The Economic Times Financial Inclusion Summit on Thursday.

Important to always believe in yourself, says P.V. Sindhu

World champion P.V. Sindhu’s advice to the budding talent in any discipline is to believe in themselves, enjoy the sport and show the desired passion.