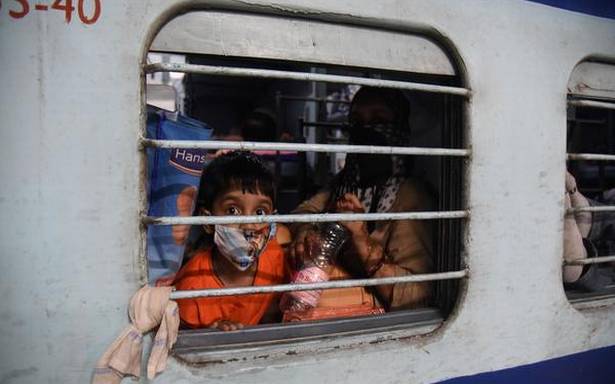 Jabs for all 18+ from May 1; States can buy vaccines directly

Maharashtra reported 58,924 infections (accounting for nearly 23% of the new cases) on Monday, followed by Uttar Pradesh with 28,211 new infections and Delhi with 23,686 new cases.

The party said BJP president Jagat Prasad Nadda had decided that Prime Minister Narendra Modi and other central leaders of the party would address only small public meetings and no more than 500 people would be allowed to attend.

No difference in mortality in COVID-19 ‘first’ and ‘second wave’: ICMR

The decision was taken after weeks of discussions over how to proceed with the visit despite the pandemic, and last week officials had said he would cut short the duration and limit his travel to Delhi.

U.S. vows to lead on climate, press world to reduce coal use

Mr. Blinken kicked off a week of intense climate diplomacy by President Joe Biden, who has invited 40 world leaders to a virtual summit on Thursday and Friday aimed at raising the world’s ambitions on climate.

Mr. Ban exhorted the UNSC to act immediately to halt the violence and protect civilians, “using a range of tools at the council’s disposal.” His remarks came weeks after the group toned down a statement on Myanmar by changing a draft that suggested sanctions might be considered.

The jury of six white members and six Black or multiracial ones was sent off to begin deliberating after nearly a full day of closing arguments in which prosecutors argued that Chauvin squeezed the life out Floyd last May in a way that even a child knew was wrong.

IPL 2021 | Moeen and Jadeja trap Royals in web of spin

Dhoni and CSK were in control when Rajasthan, pursuing 189, lost the plot in this IPL clash on a pitch that offered some purchase for the spinners. Ravindra Jadeja and Moeen Ali struck body blows.

Although both teams have wasted little time in getting off the blocks, notching up two wins each in three games so far, DC will know that MI, perhaps the best-oiled outfit in the IPL, has its measure.