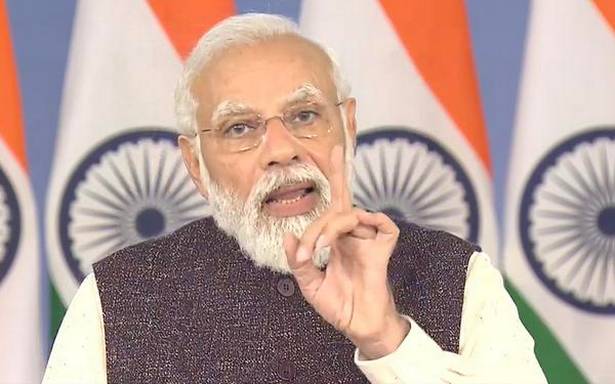 Prime Minister Narendra Modi announced on Saturday that teenagers in the 15-18 age group would be eligible for COVID-19 vaccination, and frontline and health workers and senior citizens above the age of 60 with co-morbidities on the advice of doctors would be eligible for a what he termed a “precaution” or third dose.

Covaxin cleared for those above 12

The Hindu has seen a letter by V. Somani, DCGI, according approval for the vaccine as two doses, four weeks apart.

Ahead of the Punjab Assembly elections due early in 2022, 22 of the 32 Punjab-based farmer unions that were at the forefront of the agitation against the now repealed farm laws announced on Saturday that they would contest the election under the banner of ‘Samyukt Samaj Morcha’ even as the the umbrella body Samyukt Kisan Morcha (SKM) that spearheaded the protests asserted that they would not be contesting the polls.

Four militants, including an expert in preparing Improvised Explosive Devices (IEDs), were killed in two counter-militancy operations in south Kashmir on Saturday, as the security forces stepped up operations in the Valley.

Two of them were affiliated to the Lashkar-e-Taiba and the others were linked to the Ansar Ghazwat-ul-Hind, said Inspector General of Police (IGP) Vijay Kumar.

The Prohibition of Child Marriage (Amendment) (PCMA) Bill, 2021, which seeks to increase the legal age of marriage for women from 18 to 21 years, has begun to show its socio-political impact in western Uttar Pradesh. On Friday, in a one of its kind ‘Lado Panchayat’ of girls in Meerut, it was decided that women would not vote for candidates opposed to the Bill in the upcoming Assembly polls.

Multi-disciplinary central teams have been deployed in 10 States which are reporting either an increasing number of Omicron and COVID-19 cases or a slow vaccination pace, according to a Union Health Ministry office memorandum.

A day after Agriculture Minister Narendra Singh Tomar had said the Union government had taken a step back with regard to the farm laws but will move forward again, the Congress on Saturday alleged that the Centre is making a “concerted conspiracy” to bring them back and the only way to ‘stop’ it is to decisively defeat the BJP in the upcoming Assembly elections.

Even as the pandemic hit the film business, audiences were spoilt for choice in 2021, with a lot of content shifting to the streaming universe. Here’s a look at what happened in the Hindi entertainment space in a year, when heroines found greater heft in storylines, nationalist agenda got deeper, and regional cinema pushed the boundaries further.

Poverty, education, and exposure to a community health worker are more important than age at marriage in determining whether a mother will be able to have a safe birth in a medical facility, according to a first-of-its-kind study on utilisation of institutional delivery in the country.

As Kerala braces for a potential spread of Omicron virus variant in the days ahead, multiple plans and strategies will have to be implemented to ensure that the health system is not overwhelmed and non-COVID care is not hit as it was during the peak of the previous Delta wave.

The Sepoy Mutiny of 1857 may not be India’s first war of independence.

The first such war, not recognised by Indian history, took place in 1839 between the Tai Khamti people and the British. The theatre of this war was some 2,400 km east of Meerut in Uttar Pradesh where the mutiny began, Arunachal Pradesh’s Deputy Chief Minister Chowna Mein said.

The Bharatiya Janata Party may use the Assam formula in poll-bound Manipur — not project anyone as the Chief Minister for a possible change of leadership.

A senior central leader of the party groomed by the Rashtriya Swayamsevak Sangh said the BJP’s approach to the 2022 polls in Manipur could follow a similar trajectory and one of the frontrunners is Minister Thongam Biswajit, whose portfolios include Panchayat and Rural Development.

The upcoming three-Test series — the first match gets underway at Centurion on Sunday — is significant.

India has a gilt-edged opportunity to make history at a time when the South African team is not at its strongest. And when its Director of Cricket Graeme Smith and coach Mark Boucher are under investigation for racism in a country where the subject is so sensitive.