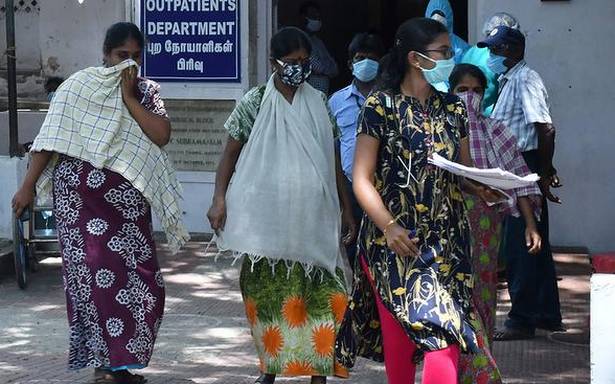 There is also an increase in the severity of infection among them, say doctors

Doctors have been seeing a significant rise in the number of pregnant women testing positive for COVID-19 during the second wave of the infection. But this is not the only cause of worry — there is also an increase in the severity of infection among them and many pregnant women have been requiring oxygen support.

It is nothing like the first wave last year, say obstetricians and gynaecologists in the city.

“Now, almost one in three pregnant women is testing positive for COVID-19,” said Jaishree Gajaraj, senior consultant, obstetrics and gynaecology. “At least 50% of them are having some symptom or the other. Last year, we never saw any pregnant woman going into the Intensive Care Unit (ICU). From April-end till now, we have seen one or two patients going into the ICU. There is rapid disease progression among pregnant women,” she said.

Both pregnant women and lactating mothers are currently not eligible for COVID-19 vaccination in the country. “All major societies and gynaecologists’ bodies have represented to the government, seeking permission to vaccinate pregnant women as we are seeing mortality,” she added.

S. Vijaya, director, Institute of Obstetrics and Gynaecology and Government Hospital for Women and Children, said since April, they had treated nearly 200 COVID-19 patients who were pregnant. Presently, there are 60 pregnant women who have tested positive for the infection.

“In the first wave, we treated 800 pregnant women in a span of six months. Now we have already treated 200. We are seeing that many infected pregnant women are needing oxygen support. This was not the case during the last wave, when a majority of our patients were asymptomatic. Now we have patients coming in with breathing difficulties and requiring oxygen,” she said.

Most were in the fifth to eighth month of pregnancy, she said, adding: “As they are in these middle months, we have to continue the pregnancy. We cannot adopt a prone position. The severity of infection is also high in some of them,” she said.

She added that they were waiting for recommendations on vaccination for pregnant women and lactating mothers. “In the meantime, we have discussed the need to shift women in households where any family member has tested positive to a separate facility. They should be moved out and quarantined in separate healthcare or care centres. We have also cut down antenatal visits and asked them to come for checkups during the third, fifth, seventh and ninth month of pregnancy, instead of monthly visits,” she said.

IOG has a separate ward for pregnant women with fever and cough, she said. At the Government RSRM Lying-in Hospital, two to three deliveries of infected pregnant women are conducted in a day, on average.

At the Government Kilpauk Medical College (KMC) Hospital, where high-risk pregnancies are being referred now, there are 30 pregnant women who have tested positive. “For women under the age of 25, it is better to postpone pregnancies. Getting infected during early pregnancy has its own risks. Pregnant women have to go for regular medical checkups. They should avoid crowds and take adequate precautions,” P. Vasanthamani, Dean of KMC, said.

On conception, Dr. Gajaraj said, “I tell couples that we are so much in the dark, and they could wait for a couple of months.” She said pregnant women should avoid going out. “If they have to, they should wear masks. They should avoid social gatherings, baby showers and other ceremonies as well,” she said.