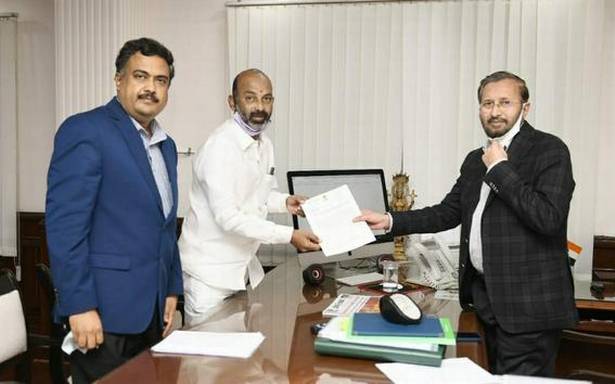 Telangana Bharatiya Janata Party (TBJP) has requested the Ministry of Environment and Forest (MoEF) to amend the laws pertaining to issuance of environmental clearance to projects by making it mandatory to include approvals of the Ministry of Jal Shakti (MoJS) to prevent loss to the public exchequer.

State BJP president Bandi Sanjay Kumar along with Advisor to MoJS Sriram Vedire met Union Minister of Environment and Forests Prakash Javadekar in New Delhi on Thursday and submitted a letter with the request alleging that the TRS government was resorting to misuse of the public exchequer on a large scale.

Mr. Sanjay Kumar explained to the Union Minister that the Telangana government was getting away from scrutiny of the projects proposed by not submitting detailed project reports (DPRs) to MoJS to seek inter-state, hydrology, techno-economic viability, and cost estimates, among others. However, the State government was getting environmental clearances by submitting the DPRs to MoEF, separately.

The issue, if not addressed, would continue to cause huge loss to the public exchequer as the Telangana government has taken up many projects on the inter-state rivers of Godavari and Krishna. Although it is mandatory that DPRs of the projects proposed are to be submitted to various Central agencies for their appraisal and approval before executing/implementing them, the State government was ducking some procedures to avoid scrutiny on cost related issues.

Mr. Sanjay Kumar alleged in the letter that the DPRs were not being readied for the benefit of people but to benefit private firms and agencies, who are awarded the works.

“Costs of works in DPRs are escalated only to benefit the agencies resulting in large scale corruption at the highest level. Techno-economic viability of the projects is not being considered, denying the intended benefits to people,” he stated in the letter.

This, the BJP MP said, was possible as the approval from MoJS was merely advisory in nature and the government was conveniently avoiding the process and without the approval of DPRs by MoJS, was submitting them to MoEF to seek environmental clearance, which is statutory in nature.