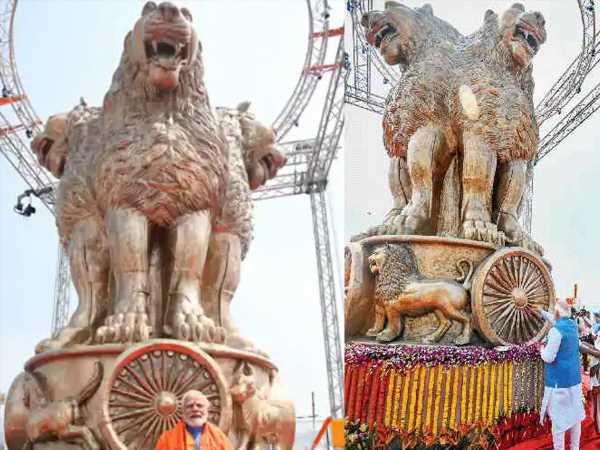 On Monday, the Prime Minister of India Narendra Modi launched the National Emblem on top of the under construction Parliament. It is made with Bronze metal and weighs 9,500 kilos and measures 6.5 metres height. But the National Emblem is elevating opprobriums around the political circles.

There are two such aspects with which Modi is being criticised. Some of the politicians found fault with the Hindu rituals performed by Modi and the second one is the aggressive expression of lions in the National Emblem.

The eminent advocate Prashant Bhushan took to Twitter to share his views on the Emblem, tweeting, “From Gandhi to Godse, From our National Emblem with lions sitting majestically & peacefully, to the new national emblem Parliament builiding under construction at Central Vista. Angry lions with bared fangs. This is Modi’s new idea!”

Also, a well known communist Swati Chaturvedi’s similar tweet reads, “The original is regal, so much grace & majesty the new one is disproportionate & looks ugly like a made in China bad copy.”

These tweets are to be accepted by the Central government, because it is true that the lions in the new National Emblem are aggressive and look awkward, when it is compared to the original Emblem.