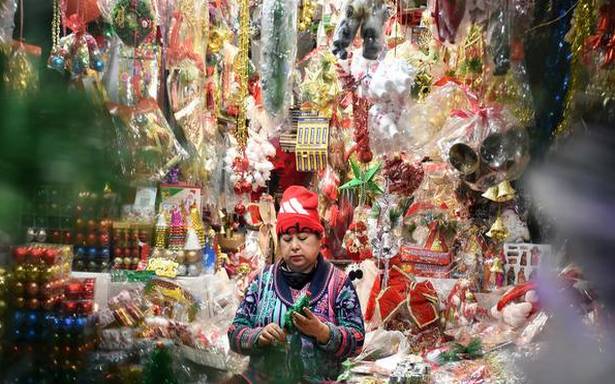 A group of boys claiming to be members of the Bajrang Dal stopped Hindus from celebrating Christmas in southern Assam’s Silchar on December 25.

They also manhandled a few non-Christian revellers at the town’s Presbyterian Church near the Cachar district police headquarters, locals said.

In a video uploaded on social media, one Rangirkhari claiming to be a leader of the Bajrang Dal’s local unit, said: “We have nothing against the Christians who have every right to celebrate Christmas. Our issue is with the Hindus who went against their dharma to sing Merry Christmas instead of observing ‘Tulsi Divas’ ”.

Since 2014, December 25 has been marked as ‘Tulsi Divas’, a day to celebrate the medicinal and spiritual significance of the basil plant.

In the video, Bajrang Dal activists donning saffron scarves and chanting ‘Jai Shri Ram’ also said they locked the church after 11 p.m. as there were too many people violating the COVID-19 protocols beyond the time allowed by the administration.

Cachar’s Superintendent of Police, Ramandeep Kaur said: “It was an open celebration of Christmas involving members of different communities. A few Hindu boys came and asked the Hindus [among the Christmas revellers] not to participate.”

She said the police had not received any formal complaint yet. “But other legal procedures against the people involved are being undertaken,” she told The Hindu.

A similar incident happened in Silchar during Christmas in 2020 with members of radical Hindu groups preventing Hindus from participating in a festival “meant for Christians only”.