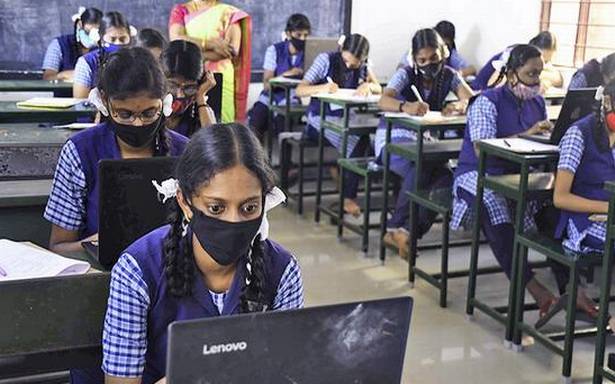 The State government is now tasked with taking a decision on conducting the exams for over 8.5 lakh Class 12 students

It has been a long wait for students of Class 12 and teachers of the State board schools in Tamil Nadu for some clarity about the exams. In April this year, the State Board announced the postponement of the exams owing to the COVID-19 situation.

Following the Central government’s announcement to cancel the CBSE board exams across the country, the State government is now tasked with taking a decision on conducting the exams for over 8.5 lakh Class 12 students.

Several teachers associations and academicians have now begun to send in their views to the State government, as sought by the School Education Minister Anbil Mahesh Poyyamozhi earlier on Wednesday.

The Tamil Nadu Teachers Association (TNTA) has opined that the safety of the students takes precedence over everything else and that the government should consider cancelling the exams. “Even if they decide to schedule the exams after the cases go down, this will take a lot of time. The School Education department should take into account the performance of the students in the tests that have already been conducted in school and via online methods,” said TNTA president P.K. Ilamaran. He, however, said that they were against conducting common entrance exams by the Central government.

Concerns have been raised by other stakeholders about how the Central government has decided to go ahead with NEET, but has cancelled the Class 12 board exams alone.

“If the Union government’s decision is based on how it might affect students during a pandemic, NEET should be cancelled as well. We are unable to understand the logic behind this decision,” said Prince Gajendra Babu, general secretary, State Platform For Common School System.

State governments need not follow the decision taken for the CBSE exams and depending on the prevailing conditions, the Class 12 exams can be conducted at a later date by giving the students a timetable well in advance, he said.

“To avoid confusion, the State government should categorically announce that a written exam for Class 12 will be held and that the timetable will be announced in advance as well,” he said.

The Tamil Nadu Graduate Teachers Federation in a representation to the Chief Minister said that cancelling the board exams for Class 12 would bring about difficulties in them seeking admissions for higher studies as well as employability, in the future. They have proposed that the board exams be held at a later date when the situation is conducive and that students and teachers can be allotted centres close to their homes.

“If the exams were to be completely done away with, on what basis will students from government schools in rural areas, where there have been no regular classes or tests for over a year, be graded on,” asked Patric Raymond, general secretary. He said that there was no uniform criteria that all students across the State can be judged on, in the absence of a public exam.

After remaining shut since March 2020, schools reopened for students of Class 10 and 12 alone in January this year. During the time that they functioned, till around the end of April, State board schools finished conducting the practical exams for their students. The board exams which were supposed to start in May were then postponed.