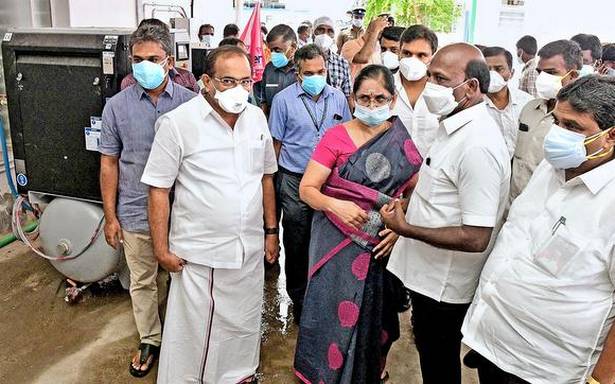 ‘ESI Hospital, with 830 beds, has been functioning efficiently’

Minister for Medical and Family Welfare Ma. Subramanian on Saturday said the government was reiterating judicious use of medical oxygen.

Considering the present crisis, doctors must use medical oxygen prudently based on the requirement for each patient, he said after inspecting the Government Medical College and ESI Hospital, Coimbatore, along with Food Minister R. Sakkarapani on Saturday.

“ESI Hospital, with 830 beds, has been functioning efficiently in the first wave and second wave. Around 17,000 people recovered from COVID-19 from the hospital, registering a very low death ratio,” he said.

According to the Minister, the hospital is having a single supplier for medical oxygen which is stored in a single plant.

The hospital administration has sought for the allocation of one more supplier and establishment for another storage plant. The District Collector had been tasked to process the request at the earliest, he said.

The Minister said the hospital was following prone positioning for patients with oxygen saturation level of 89-90 in case of emergency. The method could improve the oxygen level to 94-95 and other hospitals could follow it, he said.

Mr. Subramanian said the Food Minister, who was assigned by the Chief Minister to oversee COVID-19 containment works in Coimbatore district, had been visiting hospitals for the last four days and sending reports to the Health Department based on their requirements.

They inaugurated a new oxygen concentrator at CMCH which can generate 200 litres of oxygen per minute from the ambient air. The machine could cater to the oxygen requirement of about 30 beds, according to the hospital administration.

Mr. Subramanian later chaired a review meeting at the Collectorate which was attended by Mr. Sakkarapani, Forest Minister K. Ramachandran, the Collector, MLAs, MPs and senior officials from various departments including Health, Revenue and Police.