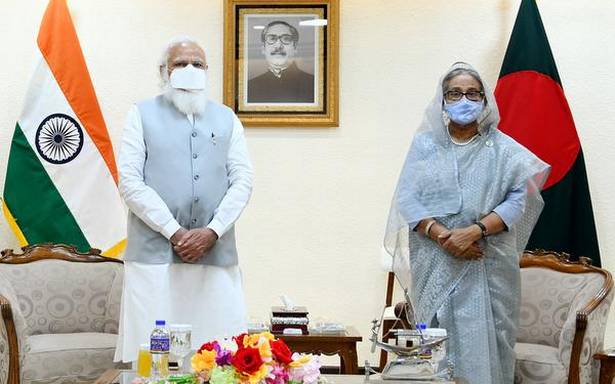 Bangladesh on Saturday reiterated that the livelihood of “millions” of its citizens depended on the Teesta river and the country should receive a proper share of its waters.

The forceful message on the issue was conveyed to Prime Minister Narendra Modi by his Bangladesh counterpart Sheikh Hasina during bilateral talks at the end of a two-day visit by the Indian PM.

“Prime Minister Sheikh Hasina reiterated Bangladesh’s long-pending request for concluding the interim agreement on the sharing of the waters of the Teesta river. She underscored that to alleviate the sufferings and save the livelihoods of millions of people dependent on the Teesta river basin, it is necessary that Bangladesh receives its fair share of the Teesta waters, the draft agreement of which has already been agreed upon by both Governments in January 2011,” declared a Joint Statement issued at the end of bilateral discussions between the two delegations.

The two leaders also instructed their Ministries of Water Resources to firm up the Framework of Interim Agreement over the six common rivers — Monu, Muhuri, Khowai, Gumti, Dharla and Dudhkumar.

Sharing of water resources has been a contentious issue between the two neighbours because of the number of stakeholders.

The two Prime Ministers also agreed that the incidents of killings along the settled Indo-Bangladesh borders is a matter of concern and instructed their respective border guards to initiate “people-oriented” border management.

The Joint Statement said the leaders have expressed their desire to bring the number of such incidents involving civilians to ‘zero’.

The killing of citizens of Bangladesh along the borders has been in the centre of bilateral ties over the last decade. India reiterated its demand for completion of the border fencing by Bangladesh “at the earliest”.

Bangladesh has called upon India to revive the jute sector with investment and through public private partnership. In this regard, Dhaka urged Delhi to withdraw the duties that were imposed on jute products of Bangladesh since 2017.

Both sides reviewed a slew of measures that have been under way over the last several years that will ease connectivity between the northeastern States of India and West Bengal. The two Prime Ministers on Saturday inaugurated the Mitali Express, a new AC train that will connect Jalpaiguri with Dhaka.

PM Modi handed over 109 ambulances with life support facilities that may be used also to help the Rohingya refugees in Chittagong.

Bangladesh also offered the airports of Sylhet and Chittagong for the passengers of the Northeastern States, especially of Tripura saying these airports will help in improving connectivity in the region.

The airport of Sylhet had earlier been in news as an Indian company had lost the bid to build the new terminal building of the airport. Prime Minister Hasina however said, the airports are meant for the “people of the region”.

The two sides reiterated their commitment to fight terrorism together and expressed satisfaction over the state of defence cooperation between the armed forces of India and Bangladesh.

Earlier in the day Prime Minister Modi visited the Jashoreswari Kali temple at Jessore and Orakandi, the pilgrimage centre of the Matua Hindus where he praised the heritage of the Matua Guru Hari Chand Thakur who started the movement in the 19th century.

Referring to the movement’s appeal in West Bengal and Bangladesh, Mr. Modi announced several measures in Orakandi including the upgradation of the existing middle school for girls. He also promised to set up a primary school in the area. He assured that Matua travellers from India will face fewer difficulties while visiting Bangladesh on pilgrimage in the coming years.