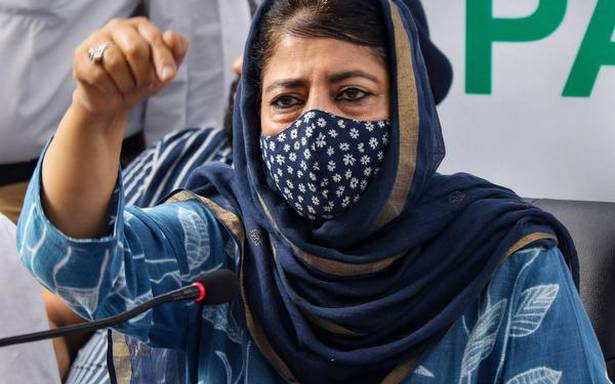 People’s Democratic Party (PDP) president Mehbooba Mufti on Sunday charged that “repression” was the Centre’s only method to deal with the situation in Jammu and Kashmir.

Reacting to the remarks by Chief of Defence Staff General Bipin Rawat warning of further curbs in Kashmir to tackle the recent violence, Ms. Mehbooba also said his statement “contradicts” the official narrative that all is well in the valley.

“Even after turning Kashmir into an open air prison, [General] Bipin Rawat’s statement comes as no surprise because repression is GOIs only method to deal with the situation in J&K. It also contradicts their official narrative that all is well here,” she alleged on Twitter.

While delivering the first Ravi Kant Singh Memorial Lecture in Assam on Saturday, Mr. Rawat said the freedom of movement that people in Jammu and Kashmir were starting to enjoy in recent times may be disrupted due to the current situation and urged for people’s cooperation in tackling the situation.

The PDP chief wondered what more measures were left to be implemented after “stringent, harsh & repressive measures” like “mass arrests”, suspension of internet at will, and setting up new security bunkers.

“After taking such stringent, harsh & repressive measures like mass arrests, suspension of internet at will, frisking people (not sparing even kids), seizing bikes plus two wheelers & setting up new security bunkers all over what is left to do?” the former Jammu and Kashmir chief minister said.