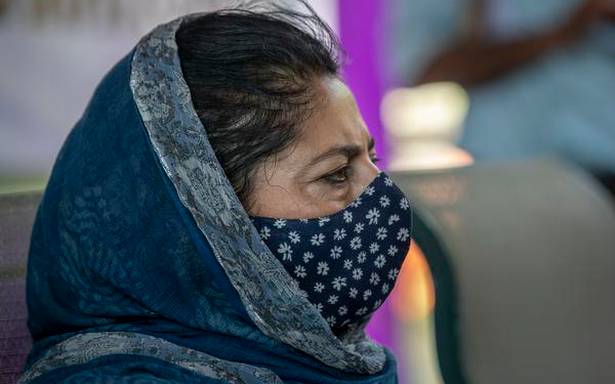 The J&K administration on Friday served a notice to Peoples Democratic Party (PDP) president Mehbooba Mufti for violating COVID-19 standard operation procedures (SOPs), two days after she addressed a party meeting in south Kashmir’s Shopian and spoke on the current situation in Kashmir.

“It has come to the notice that Ms. Mufti had called a public gathering beyond the prescribed number and the time in violation of the COVID-19 SOPs in vogue. I am serving a notice under Section 51(b) of the Disaster Management Act (DMA) 2005 and you are directed to explain as to why action under the relevant sections of the DMA and the Indian Penal Code may not be initiated against you,” the notice issued by the Executive Magistrate. Shopian, reads.

The notice was served two days after Ms. Mufti addressed over 2,000 party workers and leaders.

In her reply, Ms. Mufti said it was strange and baffling that on the very same day Lieutenant Governor Manoj Sinha presided over a function attended by hundreds of people and that too indoors.

“Why wasn’t the same yardstick applied to Honorable L-G? COVID-19 virus does not discriminate but unfortunately it’s painfully obvious that this administration does. Your actions reek of bias, and political space for those who disagree with the ruling party is deliberately being choked,” Ms. Mufti said, in the reply.

She alleged that since she had been released from detention, “a clear pattern has emerged in which my public interaction programmes and movement is intentionally thwarted, cancelled or prevented. COVID-19 has become an alibi. In the past few months, political gatherings of other political parties were in fact facilitated,” she alleged.

The former chief minister said she owes it to her people to hear their grievances and the pain they are subjected to. In her speech on August 25, Ms. Mufti warned the Centre and sought early restoration of the special constitutional position of J&K.

“Had India been ruled by the BJP in 1947, J&K probably would not have been a part of India. J&K of 1947 acceded to Gandhi’s and Nehru’s democratic and secular India,” she told the party workers.

It was Ms. Mufti’s first large public meeting in Shopian after the reading down of Article 370 on August 5, 2019.