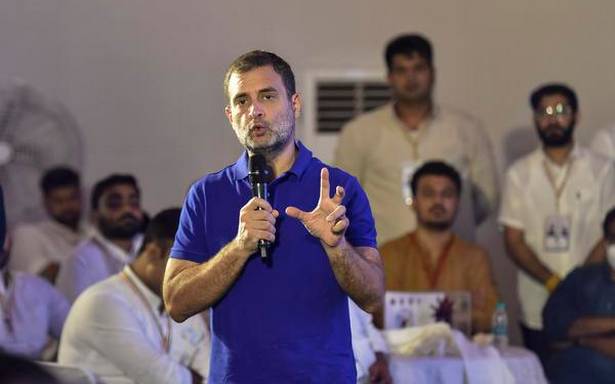 Rahul Gandhi also alleged Chinese incursions into Indian territory and citing the farmers’ agitation said that the media was not covering their protest, even when it is non-political

Congress leader Rahul Gandhi on September 11 said the media had been critical of former Prime Minister Manmohan Singh during the 26/11 Mumbai terror attacks, but it is not doing the same with the Modi government after several similar incidents.

He said this while addressing the National Students’ Union of India (NSUI) national executive meeting. Mr. Gandhi was asked by some members why the good work done by the Congress governments was not highlighted.

Mr. Gandhi cited that several terror-related incidents, similar to the Mumbai attack, had taken place during the Narendra Modi government, but it was not criticised by the media the same way as the United Progressive Alliance (UPA) was, sources said.

He also alleged Chinese incursions into Indian territory and citing the farmers’ agitation said that the media was not covering their protest, even when it is non-political, the sources said.

Mr. Gandhi said that farmers have been on protest for several months now.

Farmers are protesting against three Central agri laws at Delhi border points since last year and demanding the legislations be repealed.

The Congress leader also asked young students to work hard against the “anti-democratic government and put every effort possible to work for student welfare”, the sources said.

He also exhorted them to strive for increasing the presence of the NSUI across the country.

‘BJP sold everything that Cong. built in 70 years’

Mr. Gandhi attacked the BJP-led Centre, saying they “sold” everything in seven years that the Congress-led governments set up in 70 years.

"The Congress has always been a building block for the country and all our hard work of 70 years has been sold by the BJP in mere seven years. When the Mumbai attacks had happened, Prime Minister Manmohan Singh was called a weak PM by the media. The media did not raise questions at the time of Pulwama attacks," he said.

"I myself have been a part of the NSUI family and used to sit at the same place where the members are today. We can change the government for good," he added.

While addressing the executive, Rajya Sabha MP Deepender Singh Hooda said democracy in the country is in danger at present.

The BJP government is not listening to farmers and constantly trying to silence the voice of the Opposition, he said.

Rajya Sabha MP Shaktisinh Gohil said even when the BJP had two MPs "we respected them as Opposition" but today the BJP is working to suppress the Opposition and is not giving a chance to speak in Parliament.