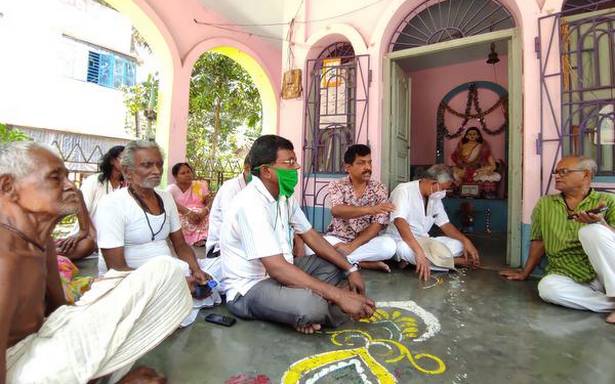 The Union Minister, who quit party’s Whatsapp groups, says ‘I am getting this feeling that those who are at the helm of affairs of the West Bengal BJP do not require me or the support of the Matua community’.

From the individual defections after the 2021 Assembly election debacle, the West Bengal unit of the Bharatiya Janata Party (BJP) at the start of 2022 is grappling with the discontent of leaders from the Matua community. Earlier this week, Union Minister and Bangoan MP Shantanu Thakur quit a number of Whatsapp groups of the State BJP, triggering speculation of a rift.

“I am getting this feeling that those who are at the helm of affairs of the West Bengal BJP do not require me or the support of the Matua community,” Mr. Thakur said. The leaders of the community, including Mr. Thakur who heads the Matua Mahasangha, have been demanding representation of leaders from the community in the committees of the State BJP.

After taking over as the State BJP president Sukanta Majumdar set up new committees at the State level and district level. On Tuesday, four MLAs from the Matua community from North 24 Parganas and Nadia held a meeting at the Bongaon residence of Mr. Thakur.

“ We want to hold on to our vote bank… We are for the good of the BJP so that we can do well in the 2024 Lok Sabha poll,” Ashok Kirtania, BJP MLA from Bongaon Uttar, said after the meeting on Tuesday evening. The Matua MLAs said their demands included changes in the BJP organisational districts in Matua-dominated areas.

The BJP central leadership has also reached out to Mr. Thakur, who was assigned the portfolio of Minister of State for Ports, Shipping and Waterways in the reshuffle of the Union Council of Ministers last year. BJP president J.P. Nadda made a phone call to Mr. Thakur and wanted to know the reason for the differences.

During the 2021 Assembly poll, the BJP and Prime Minister Narendra Modi had made a lot of efforts to win the support of the Matua community. On March 27, 2021 the day when the first phase of polling was held in West Bengal, the Prime Minister visited a temple at Orakandi in Bangladesh and paid obeisance to Harichand Thakur, the founder of the Matua sect. During the run-up to the Assembly poll, the BJP leadership raised the issue of the Citizenship (Amendment) Act, 2019 and promised citizenship to Matuas who constituted one fifth of the State’s Scheduled Caste population.

It was because of the aggressive wooing of the Matua vote bank that the BJP which could not do well in south Bengal won about five seats in areas with high population of the voters from the community.

Political observers feel that unlike the past defections, the development on this occasion where leaders of a community are upset for not having representation is matter of a serious concern for the party. Mr. Majumdar had described these developments as an “internal issue of the party” and expressed hope that these issues would be sorted out with “discussions within the party”.

The Trinamool Congress leadership has not spared the opportunity to fish in troubled waters. TMC leader and State’s Minister Jyotipriya Mullick said that leaders of Matua community were welcome to join the Trinamool and be part of the development of the State ushered in by Chief Minister Mamata Banerjee.